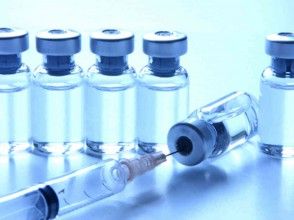 [1]The drive to restore California’s vaccination exemptions through the state referendum process has failed.

At stake was Senate Bill 277, signed into law by Gov. Jerry Brown on a wave of concern that “herd immunity” among California children was compromised by a growing anti-vaccination trend. Coauthored by state Sens. Richard Pan, D-Sacramento, and Ben Allen, D-Redondo Beach, SB277 “will require all children entering kindergarten to be vaccinated unless a doctor certifies that a child has a medical condition, such as allergies, preventing it,” as the Los Angeles Daily News summarized[2] the law.

After submitting signatures gathered in the hopes of meeting the legal threshold of adequate public support, organizers behind the would-be measure discovered that their numbers had fallen short: “They turned in some 228,000 signatures on petitions for a referendum to overturn the measure, far short of the number needed to qualify it for next year’s ballot,” as the Los Angeles Times reported[3]. “Referendum supporters needed the signatures of 365,880 registered voters by Monday to place the measure before state voters in November 2016.”

Efforts to meet the requirements were bedeviled by the shoestring character of the operation. “While the campaign deployed paid signature gatherers in the final stretch before the deadline, it was largely a volunteer effort,” according to the Sacramento Bee, “a tough task given that successful initiative campaigns typically cost millions of dollars.”

Citing internal documentation, the Bee noted that some California counties weren’t represented at all in the final tally. “Organizers in six counties did not submit any signatures by the deadline, according to an initial survey of raw data from the California secretary of state’s office. While the organizers’ spreadsheet contains estimates for large population centers like Orange County, Los Angeles County and Riverside County, they did not have an estimate for 16 counties in addition to the six the secretary of state said did not submit signatures,” the paper reported[4]. 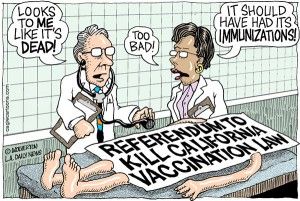 [5]But one of the foremost political figures behind the movement to restore the personal belief exemption to mandatory child vaccinations alleged that the signature-gathering effort had fallen victim to foul play. “The leading proponent of the effort, former Republican Assemblyman Tim Donnelly, said in an email Monday that volunteers were coerced and threatened while collecting signatures,” according[6] to the Associated Press. “Donnelly did not return repeated messages inquiring about the effort’s chances but said in his email that he was proud of the volunteers who worked on the campaign ‘whatever the outcome is.'” Donnelly said the push “was sabotaged from without and within by powerful forces from its very inception, but we never gave up and we never gave in.”

Although Donnelly had gained notoriety of late as an outspoken gubernatorial candidate, his charges have yet to faze supporters of the stringent vaccination mandate. In remarks to KOVR Sacramento, Pan said he supported “the right to pursue a referendum,” according to the Daily News. But Pan also told reporters he was “sure the voters of California are not interested in letting a privileged few take away the rights of all Californians to be safe from preventable disease,” the AP noted.

As the deadline for submitting signatures neared, some anti-vaccination activists created what could be a second opportunity to accomplish objectives similar to the hoped-for referendum. In a recent message posted to Facebook, the group announced that they had filed for a so-called Parental Rights Constitutional Amendment Initiative. “The measure was filed now in part because the filing fee for initiatives is going up Jan. 1 from $200 to $2,000,” the post said, according[7] to the Los Angeles Times. “Supporters have six months to collect signatures for an initiative, far longer than 90 days provided for a referendum.”