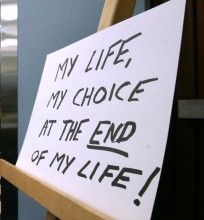 The move capped a long and sometimes tortuous effort to get legislation through the state Legislature, where opponents of elective death managed to mount a successfully targeted opposition that was eventually overcome.

Initially, the bill’s progress was smoothed when the California Medical Association ceased its opposition, as the Huffington Post noted[2], leading state Senators to pass it this June. “But before it could be brought to a vote in the Assembly, lawmakers abandoned the bill in committee amid opposition from the Catholic church as well as disability rights advocacy groups.” That led supporters to rejigger the legislation in special session last month, “adding a sunset provision so that the bill will expire in 10 years unless legislators vote to extend it. The bill passed in committee by a 10-2 vote before going on to the full legislative body for consideration.”

Brown’s logic for accepting the bill, conveyed in an unusually personal signing statement, hinted at the murky ethical territory into which the assisted-suicide movement has plunged officials in multiple states. While advocates characteristically consider at least some terminally ill patients to possess a human right to end their own lives, Brown seemed intent on sidestepping that question in favor of a more agnostic view.

“In the end, I was left to reflect on what I would want in the face of my own death,” he wrote, CNN noted[3]. “I do not know what I would do if I were dying in prolonged and excruciating pain. I am certain, however, that it would be a comfort to be able to consider the options afforded by this bill.”

As ABC News reported[4], Brown “said he consulted a Catholic bishop, two of his own doctors and friends ‘who take varied, contradictory and nuanced positions.'” Traditionally, elective suicide has been seen as a moral problem for patients as well as doctors, famously sworn to “first, do no harm.”

But that once-sturdy consensus has begun to collapse, perhaps especially in socially libertarian states like California. “Roughly two-thirds of U.S. adults (68 percent) say doctors should be allowed by law to assist patients who are terminally ill and living in severe pain to commit suicide,” Pew observed[5]. “That’s an increase of 10 percentage points in just one year, and 17 points over two years.” Meanwhile, “a new Field Poll released Monday found two-thirds of California registered voters supported a proposal to give patients the right to obtain life-ending drugs, with support cutting across most religious and political party lines,” according[6] to the San Jose Mercury News.

Yet California’s version of legalized assisted suicide did not reach as broadly as the majority public opinion may wish. “The new law requires two doctors to determine that a patient has six months or less to live before the lethal drugs can be prescribed. Patients also must be physically able to swallow the medication themselves and must have the mental capacity to make medical decisions,” NPR noted[7]. “One of the meetings must be private, with only the patient and the physician present. […] Patients must also reaffirm in writing that they intend to take the medication within 48 hours.”

Opponents have warned that those safeguards aren’t enough to prevent abuse. “Tim Rosales, spokesman for the Californians Against Assisted Suicide Coalition, said opponents of the law aren’t giving up their fight,” the Mercury News reported. “They vowed Monday to explore their options, including a referendum or legal action to repeal the law.”

Rosales and his allies were bolstered by the trouble assisted suicide has encountered in the courts. “It was permitted in New Mexico until August, when an appeals court in the state reversed a lower court ruling that had established physician-assisted suicide as a right,” NPR added. “The New Mexico Supreme Court is now hearing that case.”