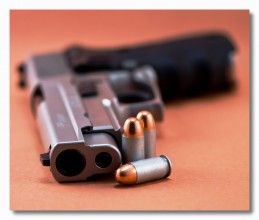 [1]Gov. Jerry Brown signed into law a bill criminalizing the concealed carry of firearms on campus.

“Proposed by state Democrats, SB707 passed the Senate in a 23-12 vote in June sending it to the Assembly where it cleared in a largely partisan 54-24 roll call in September, moving it to Brown’s desk,” as Guns.com recounted[2]. “Despite widespread resistance to the bill by state and national gun rights groups that included threats of litigation and 40,000 opposition letters delivered to Brown’s office last week, the governor was not swayed.”

The change upended prior state law, which had not circumscribed the gun rights of permit holders. “Those with concealed-weapons permits had previously been allowed to enter a college or university campus with weapons at will,” the International Business Times observed[3]. State Sen. Lois Wolk, D-Davis, introduced the bill in an effort to close what she called a loophole in the 1995 Gun Free Schools Act, which “prohibits a person from possessing a firearm in a place that the person knows, or reasonably should know, is a school zone, unless with the written permission of certain school district officials,” as the Vallejo Times-Herald noted[4].

California already boasted one of the strictest regimes in the country for regulating guns. “The new law bolsters existing restrictions in the state that prohibit the possession of a firearm within 1,000 feet of a school or college campus without written permission from administrators, and comes less than two weeks after a gunman opened fire at Umpqua Community College in Roseburg, Oregon, killing nine people and wounding nine others,” Bloomberg Politics reported[5]. Oregon was one of eight states to legalize so-called “campus carry.”

A recent spate of shootings has ratcheted up the fight over whether popularizing concealed carry would increase or decrease public safety. “The fight over whether guns should be allowed on college campuses is gaining prominence nationally. Advocates argue that students may be able to help prevent crimes such as mass shootings and rapes, but gun control supporters counter that throwing firearms onto campuses with young people, alcohol, mental health issues and strongly held beliefs on controversial topics is a dangerous mix,” the Sacramento Bee noted[6].

Both critics and supporters have attempted to determine how shooters and potential shooters would respond to knowledge of the new restrictions. Firearms Policy Coalition president Brandon Combs argued that the response would be opportunistic one. “Criminals will know that their intended victims are totally vulnerable when they’re on California school grounds because SB707 will ensure that they’re defenseless against a violent attack,” he said. But in most states with concealed carry, “an applicant must be at least 21 to obtain a concealed-carry license, which rules out most undergraduates at many universities,” The Washington Times observed[7].

The politics of opposition to the law have not always conformed to traditional expectations. In a critical analysis, the Firearms Policy Coalition noted[8] that California’s law enforcement lobby responded to the introduction of SB707 “by offering their full support — in exchange for preservation of existing exemptions for law enforcement retirees. They later cut deals to add in even more special exemptions, including for retired police reservists. Combs believes that this is blatantly unconstitutional,” it added.

Concealed carry has taken on special significance at colleges and universities in part because schools independently maintain their own security staff — not always with great rigor. A recent report revealed that California’s Community College system, the nation’s largest system of higher education at 113 campuses, “does not require schools to have security or training plans that address active shooter scenarios,” according to Guns.com.

In the midst of the presidential campaign season, California’s approach to campus carry has become a touchstone for partisan debate. On the campaign trail, Republican candidates like former Florida Governor Jeb Bush have argued that the urge to enact new gun restrictions in the wake of mass shootings is the wrong response,” Bloomberg Politics noted. “Democrat Hillary Clinton, meanwhile, decried Bush’s response.”