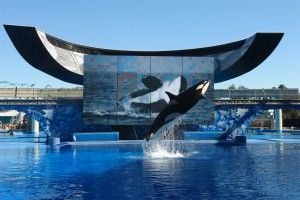 The release of a 2013 documentary, “Blackfish,” that accused SeaWorld theme parks of treating their captive killer whales cruelly put a big dent in the company’s revenue [1]in 2014. Thanks to CNN’s repeated airings of the documentary, anti-SeaWorld sentiment gets a fresh boost on a regular basis from new viewers.

But 2015 has shown improved attendance[2] over 2014’s lows. Now the San Diego SeaWorld venue is benefiting from sympathy over the incredulous reaction from some local residents to the California Coastal Commission’s Oct. 9 decision to condition accepting an expansion of a swimming tank on SeaWorld officials preventing killer whales, known as orcas, from breeding. Here’s a sampling from online comments and letters to the editor:

When did the California Coastal Commission become the Planned Parenthood of aquariums and marine parks? What’s next, requiring SeaWorld to teach abstinence to dolphins?

Big brother is once again misusing law to get their way politically. The Coastal Commission may not be “precluded” from applying this law to captive animals, but it is certainly wrong.

Let me get this straight – the Coastal Commission can regulate who and what breeds in its jurisdiction if it grants you permission to remodel?

Many online commenters responded that San Diego SeaWorld already controls the breeding of its orcas and that its actions would have no effect on normal orca procreation at the venue because there is none. But commission officials, aware of the mocking their decision was taking, responded more formally as well. In an op-ed[3] in Friday’s Union-Tribune, commission Vice President Dayna Bochco, a lawyer, defended the decision:

While passions ran high in the hearing room, the commission’s 11 to 1 vote to add these conditions to the project was substantively grounded in Coastal Act policies that protect marine resources and species of special biological significance – which surely describes orcas. These policies are routinely applied to marine mammals in the wild, but the law does not preclude their application to captive marine mammals.

This was not a power grab. The commission is not pre-empted by any federal law, and no other state agency is addressing issues related to captive whales. We were faced with making our decision in a regulatory vacuum.

The commission has always been forward-thinking in its protection of the environment, and the Coastal Act is a broad law. Over the decades it has been interpreted in ways that were controversial at the time but have since become important foundations for coastal protection.

In what appeared to be a coordinated campaign, soon after the op-ed was posted online, dozens of animal-rights supporters from around the nation posted praise for Bochco, the wife of centimillionaire [4]Hollywood producer Steven Bochco, and the Coastal Commission. But there was still incredulity:

Is the CC now going to regulate how I treat my dog and pet hamster if I live in the coastal zone?

On Thursday, SeaWorld announced it would appeal [5]the decision.