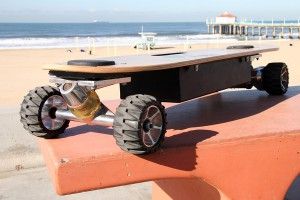 [1]With a unique new law on its side, the nascent electric skateboard industry has made California its home.

Two new startups — a third leader is based out of New York — have set up shop in San Francisco. The cofounders of Boosted Boards, thirty-something mechanical engineers from Stanford, won “backing from incubator program Y Combinator and startup accelerator StartX, as Inc. reported[2]. ZBoard, founded by “two first-time entrepreneurs in their late 20s,” found backing through Highway1, a so-called hardware incubator. “The ZBoard is the result of a senior project at USC that grew into a 2012 Kickstarter campaign that launched the product,” as the LA Weekly observed.

Both companies were launched in 2012. But not until this year has California law adjusted to accommodate their innovations. Signing a bill this month advanced by Assembly Republican Leader Kristin Olsen, R-Riverbank, “allows the use of motorized wheeled devices, aimed at electric skateboards but which could be extended to other new contraptions, anywhere bicycles are allowed to go,” according[3] to the Wall Street Journal. “The law, which takes effect Jan. 1, 2016, reverses a 1977 ban intended to keep noisy, stinky, gas-powered skateboards off the streets.” The bill was passed as AB604 by an overwhelming 32-1 vote in the Senate, CBS News noted.

Although some strictures remain, the new rules allowed broad new freedoms of movement. Riders 14 and older will be able “to ride electric skateboards in California bike lanes, bike paths, sidewalks, trails and roads where the speed limit is 35 miles per hour or less,” as the Weekly reported. The boards typically reach peak cruising speed of around 20 miles per hour.

Olsen took an early lead in promoting the change, sensing an opportunity for Sacramento Republicans to notch a legislative victory on a popular, forward-facing issue. “It’s a great, viable transportation option for those short commutes,” she told[4] the Sacramento Bee in March, demonstrating her own skills on an electric board. “It just doesn’t make any sense to allow an industry to build in California, but not to grow roots here,” she said.

“She also promoted the job-creating possibilities of companies that make the electrically-motorized skateboards, introducing the founders of ZBoard, a start-up that manufactures its boards in Riverbank, to share their story.”

Lawmakers and officials have touted the possibility of an economic boon as big as the one launched by California’s last leap forward in individual transportation. “Despite the restriction, manufacturers of these boards continue to invest in our state by developing and building their products here,” Olsen had remarked in a post on her website. “The industry is growing world-wide — so it’s time to modernize California law to support this emerging technology.”

The thinking harks back to the last big wave of personal rides. “California is the birthplace of skate culture depicted in the 2001 documentary Dogtown and Z-Boys, which led to the growth of the multimillion-dollar skateboard industry,” the Verge noted[5]. “Prices for a ZBoard start at $600, but as the electric skateboard goes mainstream, it’s possible that the costs will drop — riding electric skateboards on the state’s public streets is technically illegal,” and local communities retain discretion under the new law to prohibit the devices if they desire. A spokesman for Intuitive Motion, ZBoard’s manufacturer, told the Journal that “some customers canceled their orders when they learned it wasn’t legal to ride the boards.”

Riders haven’t hit the streets en masse quite yet. The law won’t go into effect until January 1, 2016. And when it does, in addition to the local rules loophole, it “will require riders to wear helmets and makes it illegal to operate the boards while under the influence of alcohol or drugs,” the San Francisco Chronicle observed[6]. “Night riders must also use boards equipped with a light and reflector,” according to the Weekly. Violations could bring a $250 ticket per infraction. But riders of electric boards — and whatever future devices fall within the ambit of the new law — will enjoy unprecedented access to public areas.