Can ‘Big Data’ figure out how to reduce CA gridlock? 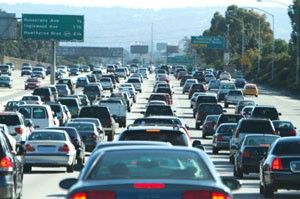 [1]The use of “Big Data” has transformed strategizing[2] in baseball, given rise to microtargeting [3]of individual voters in presidential campaigns and turned browsing the Internet into an unsettling experience in which users see advertisers guess [4]what they might want to buy based on their history of online activity.

Now an effort is being launched to see whether “Big Data” might be able to reduce California’s often-awful urban gridlock. Fortune magazine has the details[5]:

Los Angeles’ snarled, rage-inducing roads have been infamous for decades. And now, thanks to a tech industry-fueled population explosion, San Francisco is right behind L.A. in the title race for Worst Traffic in America[6].

AT&T, UC Berkeley and California’s state transportation authority are testing a new way to get a grip on the situation — by collecting and analyzing drivers’ cellphone location data. The study leads insist that users’ privacy is protected, and the information could revolutionize how we plan and manage highways and transit.

“The idea of using cellular data for mobility is not very new,” admits Alexei Pozdnukhov, assistant professor in UC Berkeley’s Smart Cities program. “What is new … is that our approach is much more detailed modeling. We can simulate very detailed scenarios, and answer questions.”

Traffic can be horrible in other parts of the state — San Diego and Sacramento freeways are often brutally clogged in the morning and evening rush hours, and the 75-mile section of the Interstate 15 corridor from Lake Elsinore to Hesperia is a common target of Sigalerts during daylight hours because of heavy commercial traffic. But the initial focus will be on the biggest population centers:

The new California projects — Connected Corridors[7] in Los Angeles, and SmartBay[8] in San Francisco — are something like Google Maps on steroids. They compile region-wide cell data into big portraits, not just of where traffic is most congested, but of overall daily patterns.

The data will help planners develop detailed responses to congestion events — Compin says there are a stunning 5,000 to 6,000 events per year on the I-210 corridor, making up about 50 percent of traffic delays. By working closely with local authorities and public transit providers, Caltrans hopes to make better decisions about how to re-route traffic onto parallel corridors and local roads, and communicate changes to commuters more smoothly. The San Francisco pilot is centered on Interstate 80, and among other things, says Pozdnukhov, hopes to determine the potential impact of increased development on the Treasure Island neighborhood the highway passes through.

Research can be basis of driverless-car grid

The effort depicted by the Fortune article could end up being as tantamount to a crucial first step toward establishing a grid for driverless cars. Such a grid could steer traffic in certain directions based on algorithms anticipating optimal vehicle flow. The theory is this could be done in a way that would dramatically reduce[9] gridlock.

Studies also emphasize how an orderly computer-run traffic grid of autonomous cars could sharply reduce pollution[10], especially if the cars were hybrids or otherwise didn’t have internal combustion engines.