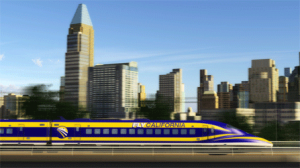 [1]A new special report conducted by the Los Angeles Times has thrown very cold water on the California High Speed Rail Authority’s plans for bringing a bullet train to the Golden State.

Through an in-depth investigation, the paper revealed embarrassing details of the train’s lurching progress toward an apparent morass of spiraling costs, spooked investors and — worst of all — an engineering disaster in the making.

Heads in the sand

In one particularly galling example of misfeasance, when California’s main project management contractor, Parsons Brinckerhoff, raised the alarm years ago, it was simply ignored by the authority’s top brass. A document obtained by the Times revealed that Parsons Brinckerhoff had briefed state officials on the spiraling cost projections in October of 2013. “But the state used a lower cost estimate when it issued its 2014 business plan four months later,” noted[2] the Times. “Jeff Morales, the rail authority chief executive, said he was not aware of the Parsons Brinckerhoff projection. A spokeswoman for the authority declined to discuss the differences in the estimates.”

Opposition to California’s high-speed rail project has been strong since Gov. Jerry Brown first threw his weight firmly behind the idea. Critics have predictably held up the Times report as proof that they saw its failures coming from a figurative mile away. As the Reason Foundation suggested as early as 2008, “cost overruns were likely, state and federal funding would not be sufficient to cover the costs of the project, the state would have to spend more money, and private investors would not be making up the difference,” as Scott Shackford noted[3] at Reason.com.

The challenges revealed by the report go far beyond those objections, however, raising the specter of dangerous environmental damage done virtually blind. “It will be the most ambitious tunneling project in U.S. history. Crews will have to cross the tectonic boundary that separates the North American and Pacific plates, boring through rock formations and earthquake faults, some of which are not mapped,” the San Francisco Chronicle noted[4]. James Monsees, “one of the world’s top tunneling experts and an author of the federal manual on highway tunneling,” said the plan was unrealistic. “Faults are notorious for causing trouble,” he cautioned.

“A 2012 report by Parsons Brinckerhoff, obtained by The Times, warned the rail authority that the ‘seismotectonic complexity … may be unprecedented’ and that the rail route would be crossing faults classified as ‘hazardous.'”

But the tunnel trouble arose from the authority’s inability to surmount public criticism to easier, more direct routes. “The original plan was to build the train route up along the 14 Freeway, but a host of nearby residents from Pacoima to Acton, many freaked out about a high-walled train corridor cutting through their towns,” according[5] to Curbed Los Angeles. “Angry citizens in San Fernando even interrupted an informational meeting in on the rail project to protest its dangers to the local economy and the ‘death wall’ that would split the town in two along the route.”

That led the authority toward the current, disparaged tunneling plan — and, last month, a request for “permission to test-drill deep beneath the Angeles National Forest to determine the feasibility of digging a rail tunnel through the rugged San Gabriel Mountains near Santa Clarita,” as the San Gabriel Valley Tribune noted[6]. Among officials, the fear of another public outcry has yet to abate. “In what only can be described as an unusual process, the U.S. Forest Service is asking the public for their thoughts on whether to allow the rail authority to proceed with its tunnel study,” the Tribune added.