Lawsuits up as state implements regs to stem slave labor 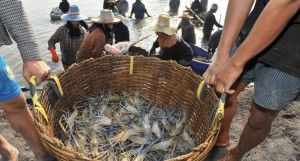 Plaintiffs claim the companies — which are not necessarily based in the state but are subject to its laws — have misled consumers about the origin of their products.

“Defendant does not advise U.S. consumers, in its packaging or otherwise, that the supply line for farmed prawns has been tainted by the use of slave labor in Thailand,” reads a complaint against Costco, which contends the shrimp were harvested in waters of Thailand using slave labor.

“This lawsuit seeks to give Californians confidence that they are not serving slavery for dinner,” plaintiff’s attorney Derek Howard, of the Howard Law Firm in Mill Valley, said in a press release[2].

After the lawsuit was filed, Costco released a statement[3] reiterating the company’s goal “to promote better labor practices through accountability, verification and transparency.” The company’s 2011 supplier code of conduct[4] bars certain practices including use of slave labor, and Costco last year formed a shrimp “task force”[5] to look into the operations of Thai suppliers.

The Costco complaint is one of six separate actions filed in California federal courts in August and September against entities doing business here, including Nestle[6], Proctor & Gamble[7] and Costco[8]. The plaintiffs are using, in part, disclosures on company websites pursuant to the California Transparency in Supply Chains Act.

The potential legal bonanza comes as state lawyers have become more hands-on in policing the 2010 law, which backers said would stem human trafficking and slavery by requiring public disclosures about how companies are ensuring workers are not being exploited to produce their goods.

The Attorney General’s office recently distributed to large manufacturers and retailers a 50-page “resource guide[9]” on complying with the California Transparency in Supply Chains Act.

Companies this year also received a letter[10] from the AG’s office, informing them that “your company must post on its Internet website the required disclosures if it meets the eligibility criteria – namely, if your company is a retail seller or manufacturer doing business in California and has annual worldwide gross receipts that exceed $100,000,000.”

California is home to courts that tend to be sympathetic to pro-consumer, anti-big business claims. There is also an army of law firms eager to take on the full coffers of large corporations.

To call it venue shopping for these lawsuits “would not be inaccurate,” said John Kloosterman, a lawyer who has advised companies on how to comply with the mandates of the supply chain act.

While other states have decried human trafficking and its connection to goods peddled in the U.S., “California is the only state that has enacted legislation” that requires an online assurance of vigilance, Kloosterman said.

He said some companies that had previously established outposts in California have scaled back.

The notion of tracking a supply chain is being embraced by attorney generals of both political stripes and creating some unlikely alliances. California AG Kamala Harris is in league with Tea Party favorite Florida AG Pam Bondi[11], for example. But Florida is not requiring the disclosure that California is. Instead, it is releasing “recommended” policies[12] including employee training and policies.

Californians interested in researching products can go to Knowthechain.org[13] and look up a corporation to see if it is complying with the state requirement. The website is supported by Humanity United, a progressive foundation set up by eBay founder Pierre Omidyar and his wife, Pam.

It provides grants to a number of other non-profits, including the Center for American Progress[14], the Art of Revolution[15] and the Clinton Foundation.

Last year, the group released a presser[16] outing the 85 firms that it believed were silent on the requirements of the transparency act with regard to the state law.

Calls to the California Chamber of Commerce and the California Grocers Association, both of which opposed the supply chain act and represent members subject to the act, went unreturned.