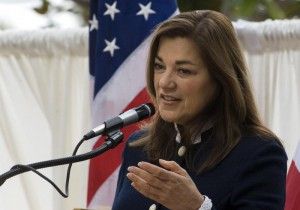 [1]Faced with an uphill battle in her Senate campaign against establishment favorite Kamala Harris, the state’s attorney general, Rep. Loretta Sanchez has turned her sights on an unlikely constituency: Republicans.

According to reports, Sanchez’s insurgent bid faces an intertwined political and demographic challenge that has suddenly turned GOP voters from foes into potential allies. “To survive the state’s top-two primary election in June, Sanchez needs two of her biggest bases of political support, Southern Californians and Latinos, to defy their historically lackluster turnout at the polls,” said analysts, according[2] to the Los Angeles Times. “Support from California’s growing group of independents and moderates — Republican moderates, in particular — may also be essential.”

That kind of coalition would require no small amount of political jujitsu. In recent months, the state and national political scene has frequently been dominated by acrimonious debates on immigration — often fueled by conservatives frustrated with the selective nonenforcement of current law. But that issue hasn’t exhausted the ideological differences that often keep Republicans from crossing over in California. “Crafting a campaign that appeals to this patchwork of voters, many with divergent views on taxes, immigration and other divisive issues, could be difficult,” noted the Times, although “Latinos and moderate Republicans do align on certain issues: creating jobs, strengthening the middle class and improving schools with such actions as weeding out bad teachers and embracing charters.”

In this sense, the challenge for Sanchez has less to do with bringing Latinos and Republicans together than convincing Republicans to cast their vote for a Democrat. That’s why her hopes have centered around the prospect of squaring off again against Harris after primary season. “If Sanc­hez makes it to the gen­er­al elec­tion, al­lies of the Or­ange County Blue Dog Demo­crat say her more mod­er­ate pro­file could help her pick up sup­port from in­de­pend­ents and maybe even some Re­pub­lic­an voters who wouldn’t have a can­did­ate on the bal­lot,” National Journal reported[3].

Here, the deep personal and political fissures in the California GOP could be decisive. “At the state Re­pub­lic­an Party con­ven­tion in Ana­heim last month, there was talk about con­sol­id­at­ing be­hind one can­did­ate if he pulled ahead of the oth­ers,” National Journal added. “But each of the men run­ning spoke zeal­ously about his own path to vic­tory, and Re­pub­lic­ans have not been op­tim­ist­ic about end­ing up with one stand­ard-bear­er — es­pe­cially be­cause oth­er can­did­ates con­tin­ue to eye the race.”

Sanchez’s scramble for a path to victory comes at a moment when the comparative size of her campaign war chest has also become the focus of horserace handicapping. Harris has outraised her by a significant margin. “Sanchez reported raising almost $1 million in contributions this year for her U.S. Senate campaign, well behind the $6 million” raised by Harris, according to financial filings reported by the Times.

But Harris has also been quick to allocate her resources, “burning through campaign cash nearly as rapidly as she raises it,” according to the Sacramento Bee. “She is spending hundreds of thousands of dollars on mail fundraising appeals, a large campaign staff anchored in Los Angeles and prominent fundraisers scattered across the country.” Between July and September, the Bee added[4], Harris spent $1.4 million out of $1.8 million raised, tacking on $400,000 of debt. Separately, the Bee reported, Harris also availed[5] herself of some $300,000 in loans.

Republicans, for their part, have come in far under the fundraising level of either Democrat. Although some of the three GOP Senate contenders have gotten off to a relatively late start, none have exceeded $250,000 since entering the race, according to the Bee.