Sen. Hertzberg praised for bills that can’t get votes 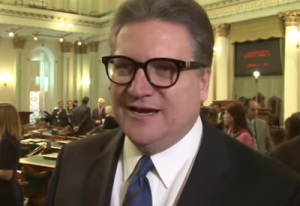 State Sen. Bob Hertzberg, the San Fernando Valley Democrat who aspires to higher office, is being honored by NewDEAL[1] (Developing Exceptional American Leaders) — a group devoted to improving the economy while staying true to progressive values.  Two measures introduced by Hertzberg were among the 18 bills recognized in the 2015 New Ideas Challenge, a competition for proposals to “modernize government.”

Senate Bill 8 would change the tax code to reduce the reliance on topsy-turvy income tax revenues by adding taxes on services and reducing them on personal income. Here’s a description [2]of it from the LegInfo official site:

California’s two trillion dollar economy has shifted from being mainly agricultural and manufacturing in the 1950s and 1960s, when the framework of today’s tax system was set, to one based on information and services, which now accounts for 80 percent of all economic activities in the state. To achieve a future as promising as California’s past, we need a tax system that is based on this real economy of the 21st century while ensuring that new revenue is invested in strengthening the ladder of mobility for all our residents.

The second, SB155, would better integrate California into the Western region’s electrical grid to promote a more resilient system and show how California’s embrace of more renewable sources of energy can be emulated by other states. There’s no bill analysis available, but the intent is to offer up the Golden State as both a model and a partner for states considering more ambitious renewable mandates.

But the twist is that while Hertzberg’s bills are broadly lauded by an East Coast group, in Sacramento they barely made a wave. Neither has ever been voted on, even at the committee level.

It’s not clear why other Democrats in the Legislature are cool to SB155. But the central ideas driving SB8 — that we have an outmoded state tax code that poorly serves residents and the business community — have been around for years. They were the driving force behind a 2009 report [3]issued by the Commission on the 21st Century Economy, a panel set up Gov. Arnold Schwarzenegger whose supporters included both Republican luminaries (former Treasury Secretary George Shultz) and Democratic ones (former Gov. Gray Davis).

The report proposed what commission chairman Gerald Parsky called the world’s first tax code specifically designed to promote economic growth; one that reduced many current taxes while imposing new taxes on a wide range of services. Parsky, a Rancho Santa Fee businessman and high-profile behind-the-scenes Republican player, predicted it would lead to a broad California economic boom even without the regulatory reform that business groups have long wanted.

The private Think Long Committee for California, with a more liberal pedigree, made similar recommendations [4]in 2011. The committee chairman, billionaire businessman Nicolas Berggruen, predicted a smart tax code could yield a wave of vast new funding for K-12 and higher education.

Neither got anywhere. Democrats objected to lowering income taxes on the wealthy, while Republicans objected to adding big new areas of commerce for government to tax.

Hertzberg appears to be finding the same resistance.