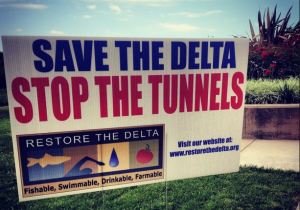 Especially in the Delta region itself, public opinion has turned sharply against the scheme, which would cost over $15 billion dollars and reshape the area with massive infrastructure construction. “In recent weeks, opponents protested at the state Capitol and submitted volumes of critical comments to state and federal officials on the environmental impact of the plan,” the Sacramento Bee reported[2]. “A wealthy Stockton-area farmer and food processor, Dean Cortopassi, qualified for the November 2016 ballot a measure that could complicate the project, if not stop it altogether.”

On the other hand, according to the Bee, the upheaval “didn’t appear to tilt controversy surrounding the project beyond its traditional bearings. Delta landowners, Northern Californians and many environmentalists have for years opposed a conveyance, while labor unions and building trades groups that stand to benefit from a project support it.”

But over the course of a public comment period on the proposal, Brown’s plan was subjected to withering criticism from a vocal minority of Californians. “By midday Friday, 2,340 unique letters had been submitted, along with 6,665 form letters and 19,047 letters that were the result of online petitions, a spokeswoman with the California Natural Resources Agency said. That’s in addition to about 2,000 unique letters and 10,000 form letters received last year in response to an earlier version of the tunnels plan,” Recordnet reported[3].

One such comment came from Rep. John Garamendi, D-Calif., who called the tunnel project a “multi-billion boondoggle,” according[4] to the Appeal Democrat. “If we allow the Delta to be drained by a massive new plumbing system, it will put at risk many Delta jobs and forever change the Delta’s culture and quality of life,” he wrote.

Garamendi’s constituents have largely agreed. “The project to divert some Sacramento River water before it reaches the estuary is controversial, particularly in San Joaquin County and the rest of the Delta,” as Recordnet observed. “Opponents have relentlessly attacked the project from multiple fronts — questioning its economics, warning about its environmental impacts, and predicting hard times ahead for Delta farmers.”

But Brown has stuck to his guns, blasting the negative comments and vowing that the project would make a decisive and urgently needed difference in California’s distribution and consumption of water. “The delta pipeline is essential to […] protecting fish and water quality. Without this fix, San Joaquin farms, Silicon Valley and other vital centers of the California economy will suffer devastating losses in their water supply,” he said[5] in a prepared statement. “Claims to the contrary are false, shameful and do a profound disservice to California’s future.”

Instead of dissipating the tension, however, Brown’s words have only added to it, helping ensure that the issue will come to a head at the ballot box, when voters weigh in on Cortopassi’s initiative. He and his wife, the Bee noted[6], “have bankrolled the No Blank Checks Initiative ballot effort, pumping $4 million into the petition drive, consultants and other expenses since March.”

“Under his proposed ballot measure, any revenue bonds for public works involving the state would have to go to a public vote. That would complicate Brown’s planned strategy to pay for the twin tunnels, which rests on water users financing bonds to help fund the $15 billion project.”

As George Skelton suggested[7] at the Los Angeles Times, some skepticism toward the initiative has centered around the potential problems inherent in turning over the fate of all similar large-scale projects to the whims of voters. “But the tunnel project was purposely set up to avoid the electorate. Politicians and their appointees are making all the decisions,” he noted.