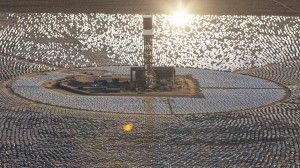 The giant $2.2 billion Ivanpah solar plant off Interstate 15 just west of the California-Nevada border has apparently won its fight with state regulators and won’t be classified as a heavy polluter that is required to buy carbon-emissions rights in the state air board’s cap-and-trade program.

The operators of a Mojave Desert solar power plant at the center of the Obama administration’s push to reduce carbon emissions faced an unusual task [earlier this month]. They had to prove to state air quality officials that they were complying with California’s cap-and-trade program to get carbon polluters to reduce their emissions.

The Ivanpah solar plant off Interstate 15 in northeast San Bernardino County makes electricity by focusing heat from thousands of mirrors onto water boilers mounted on top of three towers. Steam from the water then turns turbines that generate power.

But the plant also needs to burn significant amounts of carbon-emitting natural gas to operate and thus is required to be in the state’s cap-and-trade program.

The plant burns natural gas to heat water after sundown so that steam can be generated more quickly when the plant starts up in the morning, its operators have said. It also uses natural gas to keep electricity production up during cloudy days.

The air board says the Ivanpah plant emitted 50,145 metric tons of carbon dioxide in 2013. The P-E says that is about twice the threshold for forced participation in cap and trade. But because Ivanpah managed to cut net emissions by 10 percent in 2014 — to approximately 46,000 tons — plant operator NRG Energy is telling reporters that it is in compliance. The net emissions is key, because NRG confirmed that Ivanpah complied not just by reducing emissions but by buying greenhouse gas “offsets” from companies which do projects in various states and countries that reduce greenhouse emissions.

The markets [2]for such offsets are huge and growing. But they are controversial given that they don’t necessarily provide pollution relief to affected communities.

The California air board policy adopted in 2013 allows offsets to be purchased in any state in the nation but with emission credits applying to how much companies are polluting in the Golden State. That drew sharp fire [3]from some environmentalists.

The revelation that the mammoth Ivanpah uses so much fossil fuel perhaps shouldn’t be a surprise, given its size and complexity — it relies on 346,000 computer-synced mirrors spread over 5.6 square miles — and because solar power can be irregular.

But advocates of renewable energy say the conundrum of clean-energy plants relying on fossil fuels for their operational needs won’t last forever. They predict advances in battery technology will allow solar plants to store energy for use at night and on cloudy days.

The Santa Clarita-based BioSolar[4] start-up firm is working with UC Santa Barbara researchers on such advanced batteries. In June, it issued a press release claiming it had made a huge breakthrough[5], prompting its stock price to surge. But since then its stock price has plunged, suggesting analysts have grown skeptical of the company’s claims.