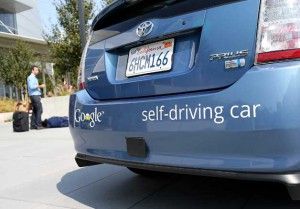 Slowly but surely, driverless — or “self-driving” — cars will make their way onto California streets.

Despite a string of setbacks, and a wave of pervasive fear that automated cars could be hacked, Golden State regulators have determined to move ahead with first-in-the-nation guidelines setting the rules of the road for the ultimate gadgets.

“The state of California hopes to release the world’s first safety regulations for the public use of self-driving cars by the end of the year, officials from the Department of Motor Vehicles said Wednesday,” according[2] to the Sacramento Business Journal. “This is the first timeline officials have offered for the release of safety regulations to govern consumer use of self-driving cars since the agency missed a statutory deadline in January. In 2012, Gov. Jerry Brown signed legislation giving the DMV until the beginning of this year to issue a draft.”

A race against industry

State officials have broadly agreed on the wisdom of moving to catch up with the automotive future. But liability issues have led to disagreements between the public and private sector over what internal information driverless automakers ought to be compelled to share. “Regulators don’t want to be blamed for unnecessarily stalling the arrival of robo-chauffeurs that can see farther, react faster and don’t text, speed or fall asleep,” CBS News noted[3]. “They’ve implored Google and traditional automakers also developing the technology to share safety data, but companies in competition don’t willingly reveal trade secrets.”

The delays threatened to stymie the industry race to field robocars, which has attracted heavy investment and fierce competition among not only the world’s leading automakers but among the tech companies pushing into the transportation market as well. “Back in May of 2014 it sure seemed that DMV experts were working hard to meet the Legislature’s December 31, 2014 deadline,” IEEE Spectrum observed[4]. “They held public hearings, consulted with industry leaders, such as Google, Daimler and General Motors, and even issued some licenses for experimental cars made by those companies and by academics. But such cars can be tested only if a qualified driver sits behind the wheel. California has licensed 98 such test vehicles from 10 companies; 73 of the cars belong to Google.”

Google, however, found itself at the center of the latest driverless controversy. When a Mountain View police officer pulled over a Google Autonomous Vehicle, he discovered there was no driver to ticket. But the issue went beyond that small irony. The driving infraction was a significant one — motoring too slowly. “There was no one at the wheel, but there was a Google operator sitting shotgun who explained to the officer how Google regulates the speed at which its autonomous cars drive,” CBS News reported[5]. “According to California law, a self-driving car can only be operated on roads with speed limits that are at or under 35 mph, and Google caps its cars’ speed at 25 mph.”

Adding a complicating factor, at least one company has used a simple conceptual loophole to press ahead with self-driving technology, putting it to use in cars built for human drivers. “Tesla’s autopilot technology is still far from fully autonomous driving, but it’s moving in that direction with actual cars on the road,” CNET reported[6]. “Today, Tesla Model S drivers can take their hands off the steering wheel while on the highway — though they’re not supposed to — and can also let the car parallel park itself.”