CA charts own course on marijuana 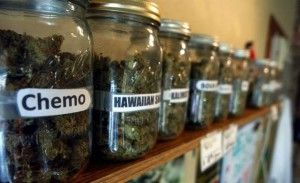 [1]With outright legalization headed toward the ballot this coming election year, government and business alike have begun hardwiring marijuana into California law and economics.

Already, state officials have begun their search for the right candidate to head the new Bureau of Medical Marijuana Regulation. In a development that will have pot advocates divided on the balance between increased freedom and increased bureaucracy, the position will combine “the drudgery of administering — say setting up IT systems for the bureau and crafting the minutiae of regulation policy” — with the kinds of perks and powers that are the envy of career policymakers, as the San Francisco Chronicle suggested[2]:

“The chosen candidate will get a rare chance in Sacramento — the opportunity to create a brand new wing of the bureaucracy. The weed czar will hire perhaps 40 to 50 people, whose salary would be paid for with the waves of new cannabis licensing fees created by California’s recently passed medical marijuana law.”

The job has opened up at a time when elected officials have ratcheted up their support for decriminalization. Members of California’s Congressional delegation have kept up a testy exchange with federal prosecutors cracking down on high-profile dispensaries. Last week, Reps. Barbara Lee and Dana Rohrabacher implored Attorney General Loretta Lynch “to reconsider enforcement actions against California’s medical cannabis dispensaries following comprehensive, stringent and enforceable industry regulations recently signed into law,” as The Weed Blog noted[3].

“We are concerned that the Department of Justice continues to threaten individuals and businesses acting within the scope of state law on the medicinal use of marijuana despite formal guidance on exercising prosecutorial discretion and recent changes to federal law. It is counterproductive and economically prohibitive to continue a path of hostility toward dispensaries,” wrote[4] Lee and Rohrabacher.

But new regulations out of Sacramento have been put in place that would tighten the screws on the state’s longstanding laxity on prescriptions for pot. As ABC News reported[5], although California “has disciplined only eight doctors in 20 years for improper marijuana recommendations,” the “laid-back approach may change. The state recently enacted legislation to require the Medical Board to crack down on doctors who write recommendations without a proper patient exam or valid medical reason.”

Nationwide, California’s status quo had inspired other states grappling with marijuana regulation to take an even tougher approach. “Lawmakers in Illinois, New Jersey and other states have tried to avoid California’s drop-in, instant exams by attempting to define in legislation a legitimate doctor-patient relationship,” added the network. “Laws commonly call for a ‘bona fide’ relationship with a physical exam and review of medical records. New Jersey doctors must register in a publicly viewable database and take courses in addiction medicine and pain management.”

Among the wrinkles in the marijuana economy that regulators have yet to iron out, the influx of so-called “trimmigrants” has drawn increased attention. Annual migrants who flood into California pot country to cash in on the crop preparation season have crystallized California’s love-hate relationship with gray-market labor. “The migrant workers contribute to the economy, but many effectively are homeless,” the Press-Democrat reported[6]. “Though the growers who employ them typically provide housing or a place to camp, when not working, they camp illegally in parks, alleys and along railroad tracks and rivers. Some can’t find jobs and turn to panhandling and frequenting food banks.”

On the other hand, native Californians have proven unwilling to compete for the jobs. Wheres trimmers “previously tended to be local residents and people who followed the music festival circuit, then stayed on the North Coast at the end of the festival season to process pot,” the new outside migrants “tend to be educated, hard workers who also cook and clean. Some marijuana farmers prefer them over locals, some of whom act as though they’re entitled to high pay and free meals,” the founder of one of the area’s premier festival pot contests told the paper.