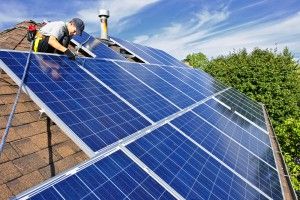 At the regulatory level, Sacramento has made a substantial investment of time and energy in a long-term plan to use California’s southern desert as a hotbed of solar power. Earlier this month, working with state Secretary for Natural Resources John Laird, U.S. Secretary of the Interior Sally Jewel released the Desert Renewable Energy Conservation Plan’s Final Environmental Impact Statement. The document[2] “outlines a 25-year blueprint for the development and management of 10 million acres of federal public lands in the California desert, currently managed by the Bureau of Land Management,” according[3] to CleanTechnica. Envisioned as “part of a much larger and more comprehensive effort to develop a total of 22 million acres in California’s desert,” the site added, advocates claimed the plan could contribute to the production of some 20,000 megawatts of alternative energy, meeting federal and state benchmarks “through to 2040.”

But solar development in desert communities has not met with universal acclaim. “California’s rooftop solar industry is at war with the state’s major utilities over a program known as net metering, which determines how much money solar customers are paid for the electricity they generate,” as the Desert Sun explained[4]. “Utility companies want to slash those payments and charge solar customers special monthly fees, while solar companies want things to stay the way they are, at least for the next few years. The public utilities commission is expected to make a decision next month.”

The conflict has drawn in consumer groups, which agree with the utilities that solar customers aren’t being charged enough “to keep the electric grid running. As a result, they say, non-solar customers are increasingly shouldering the burden of higher rates. That claim is partly supported by independent research, although most academic experts say many more people need to go solar before the ‘cost shift’ becomes a serious problem,” the Sun noted. Ironically, however, solar industry advocates have insisted that rates should be kept low enough to encourage large numbers of people to consider the switch to solar.

In casting blame, advocates have pointed the finger at Sacramento. “The California Legislature has raised the cap on net metering several times,” said[5] Brad Heavner, policy director at influential solar energy association CALSEIA, in an interview with CleanTechnica. The CPUC, he explained, was recently directed by lawmakers to consider “whether the net metering structure needs to be changed before removing the cap altogether” — set at 5 percent of combined peak demand among customers. “So the timing is somewhat arbitrary and is potentially disastrous because it coincides with the scheduled changes to the federal Investment Tax Credit.” Analysts like Heavner worry that if California solar customers lose tax credits while having their rates raised, the critical mass of users the solar industry needs will swiftly dissipate.

In an added twist, the same regulations responsible for utility ratepayers bearing a disproportionate share of costs have excluded solar owners from clean-energy subsidies that utilities and some developers have cashed in on. “If a home or business has a rooftop solar system, most of the wattage isn’t included in the ambitious requirement to generate half of the state’s electricity from renewable sources such as solar and wind by 2030, part of legislation signed in October by Gov. Jerry Brown,” as the Los Angeles Times observed[6]. “That means rooftop solar owners are missing out on a potentially lucrative subsidy that is paid to utilities and developers of big power projects. It also means that utility ratepayers could end up overpaying for clean electricity to meet the state’s benchmark because lawmakers, by excluding rooftop solar, left out the source of more than a third of the state’s solar power.”