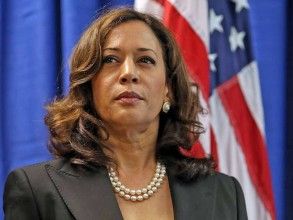 Spokesman Nathan Click recently admitted the operation was “changing campaign managers and making moves to reduce costs,” after what the Sacramento Bee reported[2] was “unusually heavy spending in recent months.”

“Click said the campaign was making spending cuts involving consultants and staff but declined to detail them,” the Bee noted, although the resignation of campaign manager Rory Steele — replaced by senior adviser Juan Rodriguez — was not as easily concealed.

Compounding the problem, Harris’s taste for high-end livingô recently landed her in a crisis of a different sort — a state ethics probe involving the Fair Political Practices Commission.

“A $21,000 spruce-up of her San Francisco loft by designer-to-the-starsô Ken Fulkô wound up putting state Attorney Generalô Kamala Harrisô under the microscope for possibly accepting an illegal gift,” the San Francisco Chronicle reported[3]. “The A.G. eventually ended up in the clear — but not before cutting a check for more than $10,000.” After the FPPC made some inquiries, “Harris asked Fulk for an accounting for any money she still owed on the job and sent in a final check for $10,245,” the paper added.

California law barsô elected state officials “from receiving a gift or gifts totaling more than $460 in a calendar year,” according[4] to the Los Angeles Times, “with a few exceptions.”

The scrutiny directed at Harris would be significant regardless of her position heading toward the state primary election. But with California’s new top-two runoff system, known as the “jungle” primary, her missteps have taken on much greater significance. Rep. Loretta Sanchez, who also wants to succeed Boxer, has been running aô less polishedô underdog campaign. But she has begun to expand herô base of support beyondô Southern California, where it remains very strong. According[5] to the Orange County Register, Sanchez recently roped inô Central Valley endorsements from Rep. Jim Costa, D-Frenso, and former Lt. Gov. Cruz Bustamante, and even made inroads in Harris’s San Francisco backyard with a nod from Silicon Valley Rep. Anna Eshoo.

With Republicans divided and the state GOP occasionally willing to simply sit out an election in the hopes of helping control the winning Democrat’s agenda, Harris has looked increasingly vulnerable.ô “Sanchez is more of an ideological centrist, as shown by her most recent spate of endorsements, and thus would more naturally draw support from business and conservative groups, as well as Republican voters,” Dan Walters noted[6] at the San Jose Mercury News. In addition to wiping out a gender gap, “Sanchez could pull Latino votes away from Harris.”ô The momentum has California’s Northern California liberal establishment on edge, fearing theô specter of the more left-leaningô candidate losing out in yet another runoff election.