Correction: Due to a reporter error, an earlier version of this article mistakenly reported that Assemblywoman Catharine Baker supports the extension of Prop. 30 taxes. Baker does not, in fact, support the proposed extensions.

Steve Glazer[2] – bald, bespectacled and mild-mannered – doesn’t look like a revolutionary. But the politically moderate Democratic state senator from Orinda hopes to be in the vanguard of a centrist coalition in Sacramento that challenges the Legislature’s entrenched partisan divide and loosens labor unions’ grip on power.

“[When] I ran, a big part of it was to break down the power that exists in Sacramento,” said Glazer at a town hall meeting in San Ramon on Nov. 30. “There is no center anymore. It’s a polarized place, from the left and from the right. It’s unhealthy, it’s very unhealthy.”

“Everybody is afraid to try to occupy that center because you lose,” Glazer continued. “So, part of the reason that I got into this was to try to break it down, and say, ‘Look, I run, I lose, it’s OK.’ But it’s an unhealthy process.”

In that campaign a union front group played a dirty trick[5] in an attempt to siphon votes from Glazer. Posing as an Asian-American business group, they sent mailers touting another Republican candidate, Michaela Hertle, but failed to mention she had dropped out of the race too late to have her name removed from the ballot.

Glazer touted his political maverick status to the standing-room-only crowd in the Amador Rancho Center, site of the recent town hall meeting.

He added, prompting laughter, “I can’t find anybody that’s really that happy with me.”

A question about why things don’t seem to get done in Sacramento prompted Glazer to elaborate on his view of Sacramento’s polarized, unhealthy atmosphere:

“Some of it is intractable and difficult to solve,” he said. “It’s because these interest groups are so powerful. When you have a choice to be made as an elected leader between what you might think is better for your community or the powers in Sacramento, what does that really mean?

“It means campaign contributions. It means the organizers that come into communities, they don’t live there, and influence the decisions that are made in that local community. It affects independent expenditure campaigns.”

For two months last spring those IE groups flooded mailboxes daily with mailers featuring Glazer’s face. Half praised him as a fiscal conservative and maverick willing to buck the special interests in Sacramento. The other half denounced him as a tool of business interests, including tobacco companies.

Several legislative report cards affirm that Glazer is one of the most fiscally conservative, pro-business Democratic legislators in Sacramento.

The Howard Jarvis Taxpayers Association[6] gave him a “D,” which sounds bad, except that every other Senate Democrat but one (Sen. Richard Roth[7], D-Riverside) received an ‘F.’ Glazer voted with the HJTA 57.6 percent of 16 bills.

The California Taxpayers Association[8] scored Glazer as voting with taxpayers only 50 percent of the time on targeted legislation. But that still made him the third most taxpayer friendly Democrat in the Senate.

Glazer did better on business legislation, according to the California Chamber of Commerce[9]. He voted with business interests on 11 of 13 bills, which is the highest score among Senate Democrats. Most Democrats voted the Chamber’s way only three or four times on those bills.

After casting more than 1,300 votes in his six months in office, Glazer said one of things he’s most proud of is his 100 percent voting score from the California League of Cities[10]. It was based on votes on 15 bills mostly dealing with local control but also with marijuana, economic development and affordable housing.

As part of his crusade for more local control, Glazer is cosponsoring Senate Bill 799[11]. It would raise a state-imposed cap on local school districts’ reserve funds. The union-backed cap was designed to free up school district funds for increased employee compensation, according to the Contra Costa Times[12].

“The whole school district cap issue happened because all the power was in Sacramento,” said Glazer. “Think about it. It’s not just about we here engaged locally concerned about your local control, your local choices.”

He continued, “They, excuse my language, they – how do I use better language? [audience laughter] – they stepped on every school district in the state. Every legislator made the choice to step on every school district in their district to create an artificial cap because of that power, that grip that exists in Sacramento on school policy. It’s very unhealthy, but it’s a great example.”

Several attempts to remove the cap failed this year, but six Democratic senators who voted for the reserve fund cap have signed onto Glazer’s bill.

In an example of the bipartisan cooperation Glazer is hoping to increase in Sacramento, the town hall was co-hosted by Republican Assemblywoman Catharine Baker[13]. She recently celebrated her first anniversary in office after fighting a similarly expensive, divisive election campaign against a union-backed Democrat. 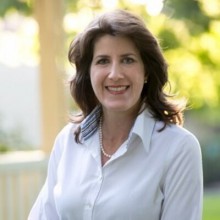 [14]She received 51.6 percent of the votes in a district with 32 percent registered Republicans, and is the only Republican state lawmaker in the Bay Area.

Baker is more fiscally conservative than Glazer. She received a “B” from Jarvis and a 100 percent score from CalTax.

No one in the Assembly, including all of the Democrats, scored higher than Baker’s 86 percent on the League of Cities report card. She received the same score as Glazer from the Chamber.

All of that commonality, including overlapping districts, has engendered a mutual respect society with each legislator praising the other at the town hall and urging a new way of doing things in Sacramento. In Glazer’s words:

“It’s the center we are trying to build and occupy. Both of us here, we see the value of bipartnership, in partnering, in building that center so it will be more reflective of what we are here to represent.”

“We wish every place was like San Ramon, but it’s not. But we are trying to break it down. We are creating a cluster here that’s very unusual in the state. A Democrat supporting a Republican, a Republican supporting a Democrat.

“So we are creating a cluster here of independently minded representatives that is unique in California. It’s part of the excitement of what we do. We are trying to recruit to find more members like that who want to join our centrist party.”

Baker is moving a companion measure to lift the school district reserve cap, Assembly Bill 1048[15], through the Assembly.