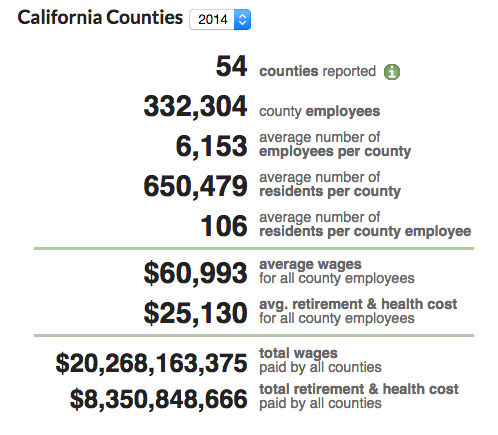 State Controller Betty T. Yee disclosed the 2014 payroll data from 54 counties and 468 cities, which included information on more than 600,000 employees. The disclosure is part of the controller’s latest update to the “Government Compensation in California” website.

The state controller’s public employee payroll website has become a powerful tool for journalists and citizen watchdogs to identify wasteful spending and corruption in local government.

Among the municipalities with questionable payroll data from 2014: the city of Vernon. Although it is the least populous city in California, with just 123 residents, Vernon has double number of employees[1]. And those employees earn $103,601 per year in salary — the highest average salary in the state. Vernon employees also take home, on average, another $32,462 per year in health and retirement benefits.

Vernon’s top salary is followed by the city of Hayward with $94,041 average salary, and Palm Desert at $89,582 in average salary. The state controller’s office notes that the average wages for city governments overall fell by 3 percent to $59,614.

In 2014, the average salary for county employees increased by approximately 3 percent to $60,993. At the county level, the nearly 19,000 employees at Santa Clara County received the highest average wage, earning $78,486 per year in wages and $27,655 in retirement and health benefits.

The counties of Modoc, Monterey and Riverside were the three counties, or 5.3 percent, that failed to file.

Yee’s latest disclosure builds on the work of her predecessor. In 2010, following the high-profile corruption case at the city of Bell, then-Controller John Chiang didn’t[2] wait around for local governments to clean up their act. He ordered cities, counties and special districts, under Government Code sections 12463 and 53892, to share salary and other wage information with his office. Initially, some local governments balked, then dragged their feet in disclosing the payroll data. 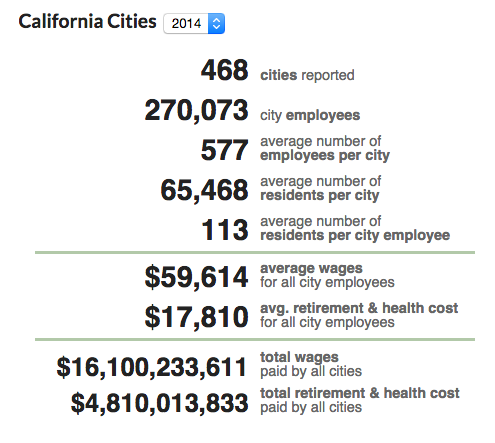