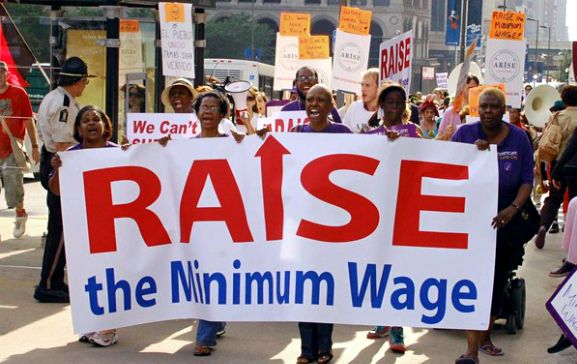 California will start the new year with a record-setting wage floor.

“On Jan. 1 California will have the highest minimum wage in the country,” as Capital Public Radio noted[1]. “California workers earning minimum wage will get an extra dollar an hour at the beginning of the year. The state raised the rate from $8 to $9 in July 2014. Soon it will be $10 an hour.” Legislation hiking the wage was sponsored by Assemblyman Luis Alejo, D-Salinas. According to Alejo, the increase would result in about $2,000 more net dollars over a year’s time working 40 hours a week at the new minimum wage.

A few other added benefits passed into law were set to take effect at the same time. “Workers will also be able to use job-protected leave to address child-care or school emergencies as of New Year’s Day,” CBS reported[2]. According to data from the federal Bureau of Labor Statistics, the channel noted, the new rules were expected to impact over 9 million California workers at or below the $7.25 federal minimum wage. (This year, legislators made one additional change to state labor law, the station noted, requiring “the cheerleaders and dance teams of professional sports organizations such as the Los Angeles Lakers to be classified as employees.”)

Faced with setbacks in Congress, Democrats nationwide increased pressure on state legislatures this year to hike their minimum wages. But in California, their push gained even more traction at the municipal level. “According to the UC Berkeley Labor Center, there are 29 cities and counties in the United States that have wage floors higher than their state’s minimum,” the Bakersfield Californian observed[3]. “Fourteen of those local governments are in California.”

But some Golden State municipalities have balked. A new city leadership in Desert Hot Springs killed an ambitious minimum wage ordinance that “would have hiked the minimum wage for such employers to $10.20 per hour next year, with $1 increases in each of the following two years and jumps tied to the consumer price index after that,” as the Desert Sun reported[4]. “Unions and franchisees would have been exempt,” it added — unlike Walmart, which signaled it would re-evaluate its long-time plans to add a franchise in town if the wage proposal went through.

The Southland’s economic situation has become a bone of political contention this election season, with Lt. Gov. Gavin Newsom taking heat for already pushing a $15 minimum wage statewide. “Labor markets in Imperial County, for example, already struggle to supply even more-experienced job-seekers with work,” wrote[5] Michael Saltsman in a column for the Orange County Register. “The unemployment rate for all employees hovers around 22 percent. Across all occupations, the median hourly wage is $13.79. Even supporters of a higher minimum wage are uncomfortable with a wage floor that’s much higher than half of the median wage, which means $15 would be economic suicide for Imperial County.”

Critics of dramatic increases in the state minimum have long contended that their impact includes cutbacks on hiring. “In an analysis of Los Angeles’ wage hike commissioned by the Los Angeles Chamber of Commerce, Beacon Economics argued the wage ordinance could lead to businesses employing fewer low-wage workers, resulting in a higher unemployment rate among unskilled workers,” as the Californian observed. But now, concerns about the outright replacement of workers by machines have been added to the mix. “Employer groups opposed to raising the minimum wage say labor costs are already driving decisions to replace human labor with technology,” KPCC reported[6]. “They say higher minimum wages will accelerate automation trends in the workplace.”

Richard LoGuercio, president of an event rentals company in Van Nuys, told KPCC he was “just screwed” with the fast hike, although he supported gradual increases in the minimum wage. “After the minimum wage ordinance was approved, LoGuercio invested in a $150,000 industrial dishwasher he had been eyeing to save on utility costs,” the station recounted. “The machine will also allow him to stop paying six to eight people who earn $10 to $11 an hour washing dishes. LoGuercio expects to recoup his costs in nine months, and save a couple of hundred thousand dollars a year going forward.”