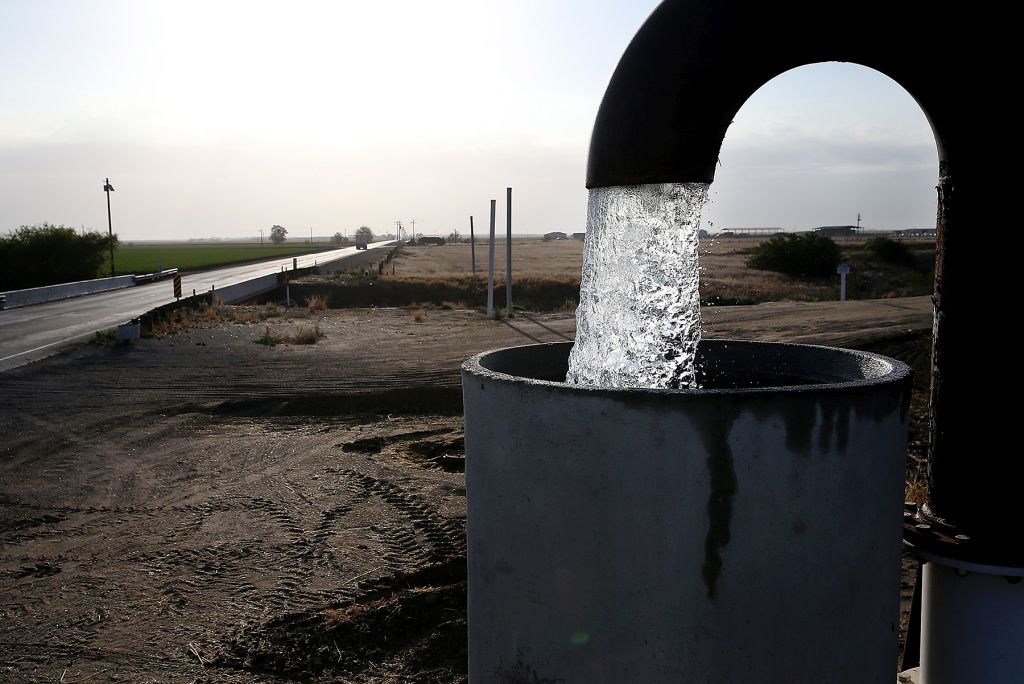 California’s struggling infrastructure faced the daunting prospect of too little water underground and too much falling from the sky.

“Four years of drought and heavy reliance on pumping of groundwater have made the land sink faster than ever up and down the Central Valley, requiring repairs to infrastructure that experts say are costing billions of dollars,” the Associated Press reported[1], citing punishing conditions affecting everything from canals to well casings to “stretches of a riverbed undergoing historic restoration.”

The problem has been ongoing for months. “The sinking is buckling the walls of irrigation canals, damaging pipes, creating giant sink holes and cracking homes,” CBS News noted[2] in August. “California’s farmers are pumping groundwater as fast as they can in order to keep their crops alive during a drought that has left them high and very dry. But when this much water is pumped out of the aquifer below ground, the clay between the pockets of water collapses and the ground starts to deflate like a leaky air mattress.”

Despite an unusually heavy El Niño, years of historically meager snowy seasons led farmers and others to turn to groundwater in lieu of high-altitude runoff. “Years of low snow packs in the Sierra Nevada mountains have forced California to pump water from underground reserves to meet residential and agricultural demand,” The Hill noted[3], adding that drought conditions push groundwater consumption up from 40 percent of total statewide usage to roughly two thirds during a drought.

California’s continuing dry spell, however, has pushed the imbalance even further, inflicting harm on the state’s sprawling but already derelict waterways. “Overpumping during the current drought has led to damaged water infrastructure around the state,” according to The Hill. “Replacing a bridge in one California irrigation district could cost $2.5 million, and building a new canal elsewhere recently cost $4.5 million.”

Too much too soon

But the collapse, and its attendant costs, have taken on an added urgency as the state faces a powerful new rainy season. In fact, El Niño rains were expected to push those costs even higher, as mudslides and flooding hit weakened structures. “Heavy rains often bring mudflows. But experts warn that the deluges expected this winter with El Niño are likely to be exacerbated by the dry conditions in countless hillside and canyon communities,” the Los Angeles Times reported[4]. “Even a little rain can set off a fast-moving debris flow, sweeping up anything in its way — loose boulders, tree limbs, cars, even homes.”

Officials faced tough tradeoffs between focusing on infrastructure repair and pivoting to emergency construction that would ameliorate the effects of El Niño. “From Ventura County to San Diego County, officials are racing to clean out debris basins, install protective barriers and develop evacuation plans for communities most at risk from an El Niño forecast to be one of the strongest ever recorded,” noted the Times.

Although experts have not calculated the final tab for the state’s subsidence, as the lowering of the ground level is called, estimates run as high as the billions over the long term. “Putting a grand total on damage from subsidence in California is tricky because irrigation districts don’t often single out repairs required by subsidence from general upkeep,” according to the AP. Department of Water Resources spokesman Ted Thomas told the wire service that the sinking of the California Aqueduct alone, which has reached over a foot, cost the state “tens of millions of dollars” over the past 40 years, with officials bracing for a similar expenditure going forward.

In the long run, however, new groundwater legislation has ensured that California farmland will simply be retired. “Groundwater pumping has kept hundreds of farms operating the past four years but continuous groundwater pumping won’t be allowed under the new California Sustainable Groundwater Management Act, which is set to take effect in 2020,” according[5] to Ag Professional. “It will limit how much groundwater can be extracted over the long haul.”