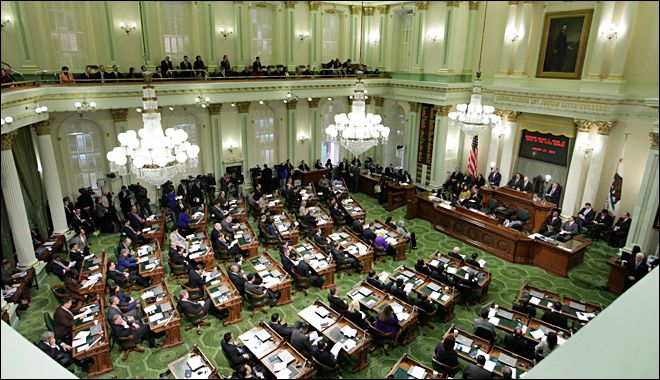 Having failed to deliver during a special legislative session Gov. Jerry Brown called last year, Sacramento Democrats and Republicans squared off on Medi-Cal and infrastructure spending this week.

A large health care hole has developed in the current state budget, driven by the increased Medi-Cal enrollment under the rules set by the Affordable Care Act. But no consensus has formed around how to fix it. “The administration, lawmakers and health plans continue to be deadlocked on Brown’s proposal to expand a tax on health plans to help generate about $1 billion for Medi-Cal,” the Sacramento Bee noted[1]. “Republican critics say the new tax would saddle millions of health plan customers with higher costs. But administration officials have warned that the lack of a replacement tax would force offsetting health care cuts in the governor’s budget,” while some Democrats have joined Republicans in questioning the wisdom of a refashioned tax, the Bee added.

The current tax supplying Medi-Cal with funding will expire in June. “The governor’s chief adviser, Nancy McFadden, has cautioned against relying on the extra tax money coming in,” the Associated press reported[2]. “Even as more people enroll, the program faces a shortage of doctors since reimbursement payments were slashed by 10 percent during the recession.”

Meanwhile, on infrastructure, the governor’s office has also faced an uphill climb. “Brown proposed a mix of taxes, fees and cap-and-trade money that he said would generate about $3.6 billion annually,” as the Bee noted[1]. “But Republicans have vowed to reject any plan that includes a tax increase, and negotiations remain on idle.” Because tax increases require a two-thirds vote of support in the Legislature, Republicans have been able to flex their muscle. But some hopes have centered around a proposal by State Sen. Jim Beall, D-San Jose. His plan “would raise an additional $4.5 billion a year for highway maintenance projects and $1.5 billion for mass transit improvements, such as BART extension lines to Livermore and Richmond,” without allocating any spending to the state’s high-speed rail endeavor, according[3] to the San Jose Mercury News.

In addition to the two dominant issues they must confront, legislators have placed education, the environment, guns and water in their crosshairs, according to the AP. “But lawmakers will again be confronted with the Democratic governor’s ‘less is more’ spending approach when he releases his budget proposal, due by Jan. 10,” the wire observed. “Democratic leaders are already beating the drums for more spending, pointing to legislative analyst Mac Taylor’s estimate that the state will have $3.6 billion more this year than assumed,” wrote[4] Dan Walters at the Mercury News. “The Assembly’s incoming speaker, Anthony Rendon, wants a heavy state commitment to expand prekindergarten education, a longtime goal of children’s advocates, who contend that it will improve academic achievement.”

But analysts expected Gov. Brown’s new budget proposal to pour cold water on the kinds of ambitions his party rank and file have pushed for again. Brown “will release his budget proposal for the coming year Thursday, amid a strong state economy and fiscal experts’ predictions that tax revenue will continue to surpass estimates from last June,” the Bee reported. “If Brown’s past budget proposals are any clue, the Democratic governor will warn that it all could quickly go south. The fourth-term governor’s spending plan is unlikely to include big new policy proposals.

Adding to the complexity of Sacramento budget negotiations, lawmakers in Washington have worked some funding into the federal budget benefiting California. The U.S. Forest Service, for instance, has been granted an additional $600 million to fight fires, according[5] to the Los Angeles Times, while a combined $50 million will go to drought relief for western states and an additional $3 million was directed toward California’s earthquake early warning systems.
Endnotes: