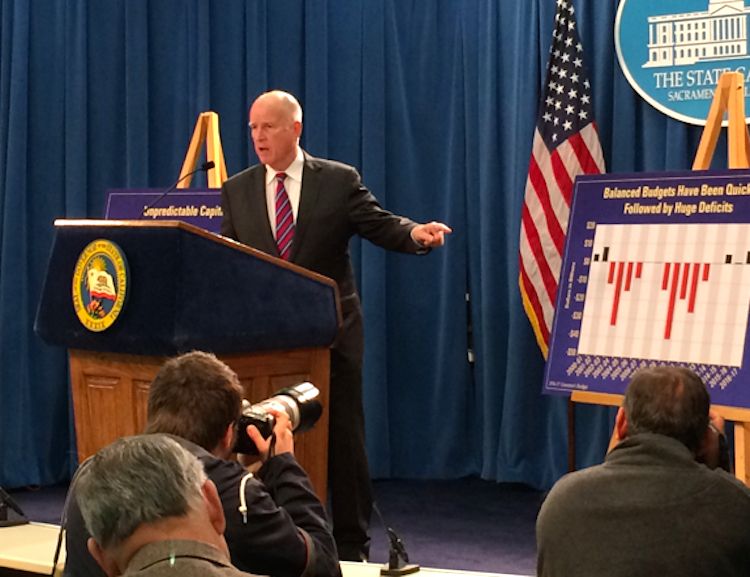 More permanent state spending would be devastating to California, Gov. Jerry Brown announced — at least in the midst of another recession. Unveiling his budget for the new fiscal year, Brown flourished a chart bearing that warning, although the proposal racks up the largest outlays of his tenure in office.

“The general fund amount is $122.6 billion, up by 6 percent over this year. Other special funds and spending outside the Legislature’s direct control bring the expected total to $170.7 billion,” the San Francisco Chronicle noted. “The rocket fuel behind these sums is the state’s volatile capital gains tax, paid by the wealthy in good times. It’s a feast or famine levy that rides with economic swings and right now it’s coining money for Sacramento.”

Fire from both sides

But while Brown’s budget upped the ante on public schools, basic entitlements and the Golden State’s rainy-day fund, his unyielding insistence on guarding against the economic worst left his party’s liberal ambitions unfulfilled once again. “Advocates for the poor cheered the governor’s proposed increases to cash aid for the aged, blind and disabled — the first time such grants would go up in 10 years,” as the Los Angeles Times reported[1], but “anti-poverty advocates said they were disappointed that there was no proposed increase to CalWorks, which provides cash payments to the working poor.” Senate President Pro Tem Kevin de León, D-Los Angeles, praised Brown for “historic investments in our children’s education that will make a tremendous difference,” according[2] to the Sacramento Bee. But he complained that “we still have to take a closer look at strengthening our health care system for the poor and developmentally disabled that has been starved for far too long.”

All told, as the Bee observed, Brown’s budget offers billions for school funding, the environment, and elderly and disabled services. He also reintroduced $1 billion-plus proposals to address the two largest agenda items left unresolved by legislators — California’s crumbling infrastructure and its looming gap in federal Medi-Cal funding. Under Brown’s plan, a new tax “would generate $1.35 billion annually by hitting all the plans, whether they accept Medi-Cal patients or not,” the San Jose Mercury News noted[3]. “If lawmakers pass the tax by a Jan. 31 deadline, Brown wants to use some of the money to boost funding for developmental disability services and in-home supportive services. If the tax were allowed to expire, the state would lose $1.1 billion in matching federal funds.” Brown voiced a hope that the state GOP would rally to his side — without them, the Legislature lacks the supermajority necessary to hike taxes of any kind. But those prospects were clouded by Republicans. “Senate Republican leader Jean Fuller, R-Bakersfield, said the state should find another way to increase spending on services for disabled Californians,” the Mercury News observed.

In one new move, Brown’s environmental spending shifted a significant increase in dollars allocated to drought and fire relief. The budget “includes a $719 million one-time drought package, including an extra $215 million to the state’s emergency fund for battling big blazes,” the Times reported[4] separately. “The extra cash, along with increased funding for healthy forests and bolstering levies, takes into account the ‘new normal’ as it relates to climate change and the state’s historic drought, officials say.” But even here, on an issue Brown has repeatedly referred to as part of an enduring crisis, he declined to propose that the funding increase be permanent.

Brown took the opportunity to weigh in on some other proposals up for a vote this election season, although he stayed mum on others. He downplayed the $9 billion school bond, the Sacramento Bee reported[5], suggesting he’d rather negotiate an alternative with lawmakers. On other potential new laws, he struck a wry note. “You haven’t asked me about guns or marijuana,” he joked[6], according to the Mercury News. “All I would say is, ‘Don’t smoke marijuana when you’re using your gun.'”