The most recent State Worker column [1]by Jon Ortiz in the Sacramento Bee said 2016 was “perhaps the most significant year for government workers in decades” because of the Friedrichs v. California Teachers Association case, which the U.S. Supreme Court takes up at a hearing on Monday. What is its significance?

“[Justices will] hear arguments over whether the union can require payment from teachers it represents in contract talks. The justices could support the status quo or issue a ruling that only changes payments to CTA. Union leaders everywhere fear, however, a broader decision that would squeeze their own treasuries and diminish public labor’s political clout at all levels of government.” 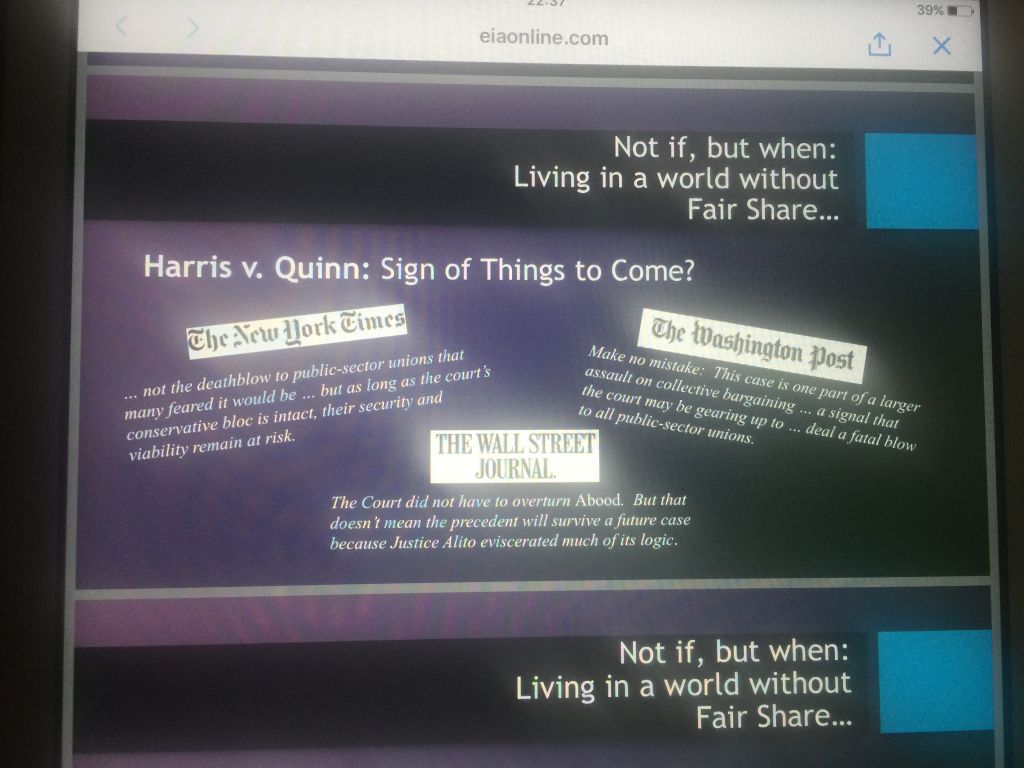 But what Ortiz’s column doesn’t mention is a fact that has gotten little attention outside of CalWatchdog[2]: The CTA fully expects to lose the case. In a 23-page PowerPoint presentation released in July 2014 — available online [3]— the CTA lays out the history of compulsory union dues payment in California, suggests this has helped the state greatly, and then goes into a downbeat recounting of the various signs that a majority of the Supreme Court — led by Justice Samuel Alito — is spoiling to revise previous rulings on the issue.

The title of the presentation foreshadows its fatalistic view: “Not if, but when: Living in a world without Fair Share.” (“Fair Share” is how the CTA describes the law that allows it to mandate all teachers pay dues to the union for the work it does.)

Politico’s reporting [4]from June 2014, on the day the court announced it would hear the Friedrichs case, points to the same conclusion as the CTA:

Public sector unions feared this day. Twice, Associate Justice Samuel Alito has stated in opinions of recent years that Abood v. Detroit Board of Ed., the 1977 case that established the constitutionality of fair share fees, was shaky. In a 2014 opinion in Harris v. [5]Quinn[6], Alito said that precedent was “questionable on several grounds.”

“Overturning Abood would be a huge setback for organized labor,” said Richard Kahlenberg of the liberal Century Foundation. “I think this is a way to try to crush the remaining small vibrant element of the trade union movement.” …

The case will likely cause acrimony within a Supreme Court already sharply divided by recent rulings. In a dissent in last year’s Harris v. Quinn decision, Associate Justice Elena Kagan said she was pleased the court had not agreed to overrule Abood, calling such a step a “radical request.” Kagan said the court was smart to let the democratic process play out in the states.” All across the country and continuing to the present day, citizens have engaged in passionate argument about the issue and have made disparate policy choices,” she said. “The petitioners in this case asked this court to end that discussion for the entire public sector, by overruling Abood and thus imposing a right-to-work regime for all government employees.”

But it’s clear the court disagrees on just what issues it should let the states and citizens decide.

CTA the biggest campaign spender of all

While national coverage has focused on the overall picture, a ruling in favor of Friedrichs would have profound implications for California, as Ortiz noted. The CTA isn’t just powerful because it can quickly mobilize its workers to take a stand for union causes. It’s also the heaviest campaign spender in California politics, which translates into immense clout in picking winners in Democratic primaries and in fighting ballot measures. This is from a March 2010 story [7]in the Sacramento Bee:

The California Teachers Association has spent more than $200 million on campaign contributions and lobbying efforts in the last decade, leading what the Fair Political Practices Commission calls a “billion-dollar club” of moneyed political interests.

The FPPC’s report, entitled “Big Money Talks,” delves into the 25 biggest — at least in financial terms — political players in the state, which have collectively spent $1.3 billion on political action in the last 10 years.

“This tsunami of special interest spending drowns out the voices of average voters,” FPPC chairman Ross Johnson said in a statement, “and intimidates political opponents and elected officials alike.”

The $211.9 million spent by the CTA is nearly twice as much as the $107.5 million committed by the second-highest spender, the California State Council of Service Employees, but after those two union groups, the remaining 13 on the Top 15 list are all either business groups, such as No. 3 Pharmaceutical Research and Manufacturers of America ($104.9 million), individual corporations or casino-owning Indian tribes, which have three of the 15 top spots.