Financially strapped motorists are catching a break through the state’s traffic citation amnesty law, which began in October and gives discounts of up to 80 percent on unpaid traffic tickets due before Jan. 1, 2013.

In Los Angeles Superior Court, $2.8 million in fines had been collected and more than 28,000 driver’s licenses restored by the middle of December, according to a new KPCC report[1]. The law passed in September after advocates for the downtrodden urged the Legislature to lessen the effect of some of the nation’s heaviest traffic violation fines.

Now, though, the state and municipalities will have to deal with a loss of revenue.

The money ends up funding any number of government projects and enterprises, depending on the location, the issuing agency and the type of violation. 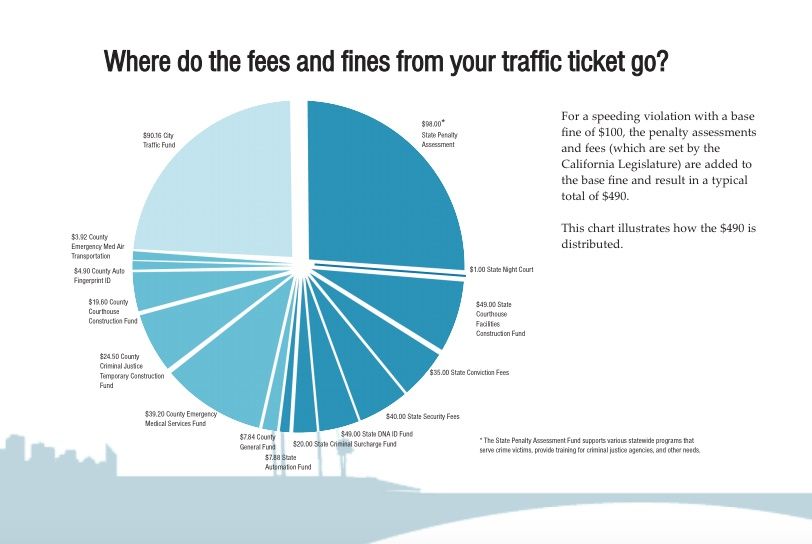 The state attaches 20 percent onto any traffic ticket, of which 70 percent is distributed to a number of operations. Leading that is a restitution fund (32 percent) followed by driver training assessment[7] (25 percent) — which pays for driver training in schools — and police training (24 percent). Eight percent also goes to the corrections training fund, which exists “for the development of appropriate standards, training and program evaluation.”

“California is unique in that traffic fees go to so many different funds as a revenue source,” said John Bowman, vice president of the National Motorists Association. “You just don’t see it to that degree in other states.”

Diverting portions of the revenue to things like officer training, he said, makes no sense.

“It seems logical that the proceeds of the fine should be tied to the nature of that fine.”

In some cases, cities and counties battle for the revenue. The city of San Jose in 2011 complained in a report that the $4 million it had been receiving for 50,000 violations has been tapped by outside government sources.

“Most revenue from traffic citations benefits the state of California and the county, not the city,” the report[8] stated.

Legislative analysts found that amnesty would have no effect on local or state coffers.

But that seems unlikely, unless SB405 was simply a feel-good measure to make motorists feel like their representatives were offering them some relief.

“This sounds like a gesture,” said Kris Vosburgh, executive director of the Howard Jarvis Taxpayers Association. “If a person feels they have a good chance to win in court, why wouldn’t they in the first place?”

But language in SB85 does give more money to state funds supported by traffic fines and fees:

The bill would, following the transfer to the Judicial Council of the first $250,000 received, increase the percentage of specified penalties to be deposited in the Peace Officers’ Training Fund and the Corrections Training Fund, which are continuously appropriated funds. 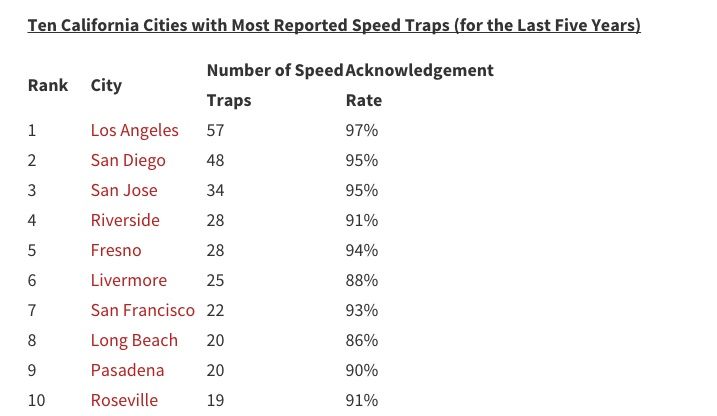 California, with 13 million registered vehicles on the road, ranks second to Texas in the number of speed traps over the last five years, according to a recent study[9] by the National Motorists Association.

The state also ranks in the top 10 based on speed traps per 1,000 of lane miles.

The crowd-sourced speedtrap.org website has tracked trouble areas and warned drivers since 1999.  Los Angeles tops the list of speed traps in the state with 57, with San Diego second with 48.  San Jose, Riverside and Fresno round out the top five.

For more information about how to qualify for the program, organized by county, see http://www.courts.ca.gov/trafficamnesty.htm[10]