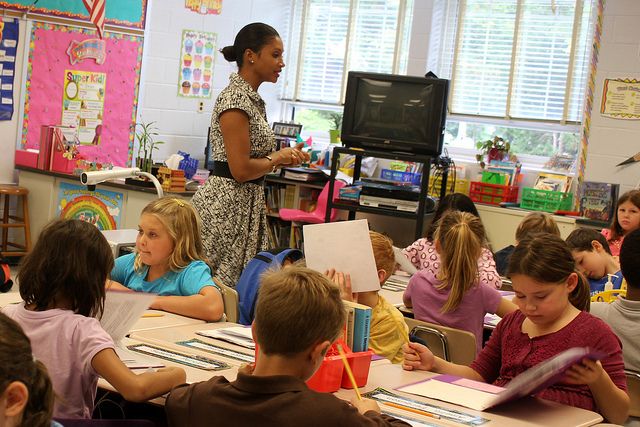 After years of mounting controversy over compulsory unionization, public pensions and other labor issues,  California has sent the Supreme Court a case that could change the power of unions in America overnight.

As the court hears oral arguments, the challenge has made “unions which represent government workers deeply fearful for their financial future and their public stature,” SCOTUSblog noted[1]. “A significant blow to their treasuries could come if non-union workers are able to turn broad hints by the Supreme Court into final victory in Friedrichs v. California Teachers Association.”

In the case, California teacher Rebecca Friedrichs sued the California Teachers Association over fees she must pay even though she is not a member of the union. “Teachers who, like Friedrichs, have opted out of the union are still represented by it in various contract negotiations, which is why they are required to pay a fee,” the Atlantic noted[2]. “In California, members pay annual dues that average about $1,000 a year, while non-members pay about $600 to $650 for the agency fee alone.”

At stake is whether unions are constitutionally permitted to extract dues spent on speech opposed by dues-paying members like the plaintiffs in Friedrichs. “Here is their logic: because unions cannot charge non-members for political activity and since non-members argue that everything a public-sector union does — even bargaining — is political in nature, it follows that any fees violate their First Amendment right not to pay for activity to which they object,” according to the website.

If the court rules in their favor, they will have overturned a 1977 decision allowing the collection of what were deemed “fair share” fees. “Twenty-three states authorize collecting these fees from those who don’t join the union but benefit from a contract that covers them,” NPR reported. Currently 9 percent of teachers have not joined the CTA, the station added. According to state law, however, “any union contract must cover them too, and so they are required to pay an amount that covers the costs of negotiating the contract and administering it. The idea is that they reap the bread-and-butter benefits covered by the contract — wages, leave policies, grievance procedures, etc. — so they should bear some of the cost of negotiating that contract. They do not, however, have to pay for the union’s lobbying or political activities; they can opt out of that by signing a one-page form.”

In one of the arcane twists now familiar to watchers of the court, where sharply divided justices sometimes rule in atypical ways for idiosyncratic reasons, union hopes have been pegged on Justice Antonin Scalia, the resident conservative firebrand. Justice Samuel Alito, whose legal reasoning conservatives often find more reliably conventional, has been viewed as the linchpin of a ruling against the CTA. “A majority opinion by Alito in 2012 suggested the fees were constitutionally vulnerable, and another decision in 2014 stopped just short of overturning the 1977 decision — a ruling that rests on ‘questionable foundations,’ Alito said for a 5-4 majority,” according[3] to the San Francisco Chronicle.

Perhaps predictably, unions and their liberal or progressive supporters have cast the case as the latest and most audacious effort by a wide-ranging alliance of monied interests, spearheaded by the Center for Individual Rights, to break the back of organized labor. For decades, conservatives and libertarians have arrayed themselves broadly against labor unions, which have grown more narrowly partisan in their support of Democrats and the open-ended expansion of public benefits for members and themselves. “Still, unlike the Koch political network and its plans to shape the presidential campaign, it is difficult to find evidence of a single coordinating body that has directed money toward the Center for Individual Rights and its legal campaign to allow public employees to opt out of union fees,” the New York Times observed[4].