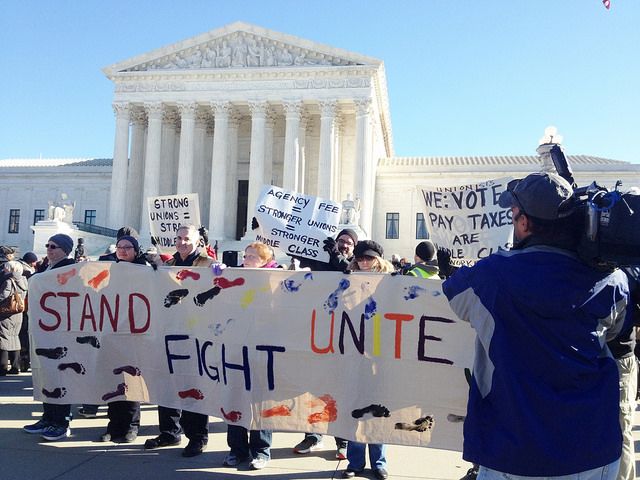 The fees are supposed to cover only non-political activities, like hammering out contract agreements. Those opting out of the union, despite paying the fee, are ineligible to vote in union matters.

Wherever it goes, the money represents an estimated $7.8 million annually for the California Teachers Association, and many feel that it is being extracted from the unwilling.

Which means that a victory in the legal crusade of teacher Rebecca Friedrichs to overturn the mandatory assessments would inflict a heavy hit on the union, which collects and uses the money. Given the choice, some teachers currently paying the $1,000 a year would forego any payment if it were not mandatory, diminishing the union’s power.

Friedrichs v. California Teachers Association[1], which was heard by the U.S. Supreme Court Jan. 11, has drawn 57 amicus filings, or documents in support of one of the two parties. Most of the filings offer legal opinion or expertise, and the originators break down along the lines of conservative and liberal.

Those supporting the teachers association include the state of California, the California School Employees Association and the Obama administration.

The plaintiffs seek to overturn a 1977 Supreme Court decision, Abood v. Detroit Board of Education, which allows the fees to be taken against the will of the employee.

“Abood failed to recognize the full extent to which teachers unions advocate positions during collective bargaining on intensely divisive public-policy issues, some of which — from the perspective of nonmember teachers — are harmful to both teachers and students,” reads the filing on behalf of Wilson.

The state’s school employees association contends in its amicus filing that “the essence of exclusive representation is that the union represents, and speaks for, all unit employees on employment issues pertaining to wages, hours, and terms and conditions of employment (hence the term “collective bargaining”) … the characterization of union representational activity as per se ‘political advocacy’ or ‘influencing public policy’ is so far outside the real world of public school employment and labor relations as to be ludicrous.”

According to one analysis[4], .08 percent of CTA political money went to Republicans between 2003 and 2012.

Since 1997, the association has donated $184 million to 583 filers, 50 of them Republicans, according to the National Institute on Money in State Politics. The top individual recipient is Gov. Jerry Brown, who has taken $3.25 million from the association. The union group also spent $3 million to help Brown defeat Meg Whitman in the 2010 gubernatorial race.

It spent $21 million in 2012 to defeat the unsuccessful Alliance for a Better California ballot measure, which would have ended payroll deductions for political activism.

It has also given money to other unions, including the Los Angeles County Federation of Labor and a Nevada measure backed by teachers unions to require additional funding for public schools.

The union also receives money from offshoot groups, including the California Teachers Association for Better Citizens, which donated $1.5 million in 2010 to its independent expenditure arm[5], and Teachers and Families Supporting O’Donnell for Assembly 2014,[6] which backed the successful campaign of Assemblyman Patrick O’Donnell, D-Long Beach,  a public school teacher seen as a political ally of the union.

The union has 65 paid staffers, including two staffers working full time on political issues – one at a gross salary of $138,087 and another at $105,004 – and three others who spent 80 percent of their time on political activities, the union’s most recent federal filing shows.

“Every year, petitioners are required to provide significant support to a group that advocates an ideological viewpoint which they oppose and do not wish to subsidize,” Michael Carvin, an attorney representing Friedrichs and her co-plaintiffs told the Supreme Court justices in his argument Jan. 11. He said the problem was not that the union was the sole representative of the workers, but that the workers were forced to subsidize the union’s political positions.

In his argument, Edward DuMont, representing the state, said that the union had to be funded and not by the state. “It’s very important that we do not fund it directly and that we not be perceived as controlling the speech of that representative.”

The decision by the Supreme Court “may mark a sea change in the way in which we understand labor law going forward,” Richard Epstein, a law professor at New York University School of Law, said in a post-argument podcast[7].

Epstein’s analysis explains that the five conservative justices regarded the plaintiffs  as “‘compelled riders’ who are obligated to pay fees to a union even if they felt they were better off without a union “even if the union offered them membership for free.”

It’s the opposite of what the union has referred to as free riders, who reap the benefits of a union without paying a full price, he said.

Epstein predicts that Abood will be overwritten in a 5-4 ruling with the conservative justices prevailing, and “the agency shop will be ended on constitutional grounds.”