A state appellate court has scheduled oral arguments for Feb. 25 in the state’s appeal of the trial court ruling in Vergara v. California, which held that five California teacher-protection laws involving tenure and layoffs were unconstitutional because they had the effect of funneling incompetent and personally troubled teachers to schools in poor minority communities.

The California Court of Appeal, Second District, will take up the closely followed appeal in its Los Angeles courtroom.

The 2014 decision by Los Angeles Superior Court Rolf Treu made headlines across the nation. After the judge cited evidence showing the near-impossibility of firing incompetent teachers in California, he wrote, “All sides to this litigation agree that competent teachers are a critical, if not the most important, component of success of a child’s in-school educational experience. There is also no dispute that there are a significant number of grossly ineffective teachers currently active in California classrooms” — with most working in largely minority schools.

The result, said Treu, was a de facto segregated system that reminded him of the circumstances in Kansas that led to the 1954 U.S. Supreme Court ruling in Brown v. Board of Education that led to the end of segregated schools[1]. He wrote that evidence presented by the Vergara plaintiffs — nine students in predominantly minority schools in Los Angeles Unified — showed California had failed to provide “a student’s fundamental right to equality of the educational experience.” 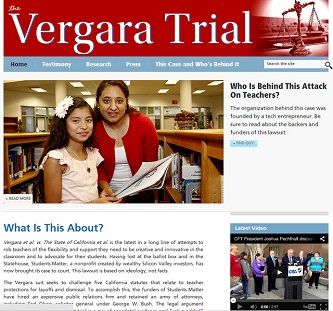 The ruling was depicted by the California Teachers Association and the California Federation of Teachers as an outrageous exaggeration of problems in state public schools and a de facto attack [2]on teachers and unions. Nevertheless, the ruling prompted the New York Times to run an editorial [3]lambasting California’s schools for neglecting Latino and African American students:

When states are sued for providing inferior education to poor and minority children, the issue is usually money — disproportionately more money for white students, less for others. A California judge has now brought another deep-rooted inequity to light: poor teaching.

The ruling opens a new chapter in the equal education struggle. It also underscores a shameful problem that has cast a long shadow over the lives of children, not just in California but in the rest of the country as well.

Treu stayed his invalidation of the teacher-protection laws pending appeal.

The state government’s appeal of the ruling, filed by Attorney General Kamala Harris, questioned Treu’s assumptions about the effects of state law:

That’s from [4]the Los Angeles Times.

A powerhouse group of law professors, led by Harvard’s Lawrence Tribe, supported Treu’s decision in a friend of the court brief:

The California Constitution establishes public schools for the benefit of children, not teachers, and the State Education Clause talks about the right to public education as “essential to the preservation of the rights and liberties of the people,” not as a right essential to the economic security of the teachers selected by the state to make that right a reality. Public schools exist to educate students, not to provide jobs, and job security, to teachers.

The State and Teachers’ Union cite a number of policy justifications to support the challenged statutes, including teacher retention, recruitment, due process, and academic freedom. … Academic freedom is the freedom to diverge from a state-imposed orthodoxy in one’s choices, within a state-imposed curriculum, of what perspectives and ideas to convey. … To invoke a fake vision of freedom of speech on behalf of teachers as a way of defending a decision to disregard the real claims of freedom of learning on behalf of students is nothing less than shameful.

Even if the record supported and the trial court found that the statutes caused the harms to the education of poor and minority students, that would not be sufficient to find the statutes invalid on their face and enjoin their enforcement. There also would need to be proof that striking down these statutes would remedy the harms and improve the education for these students. … There is no basis in the trial court’s decision, or in the voluminous record of an eight-week trial, for concluding that education of any identifiable group of students would be improved by the elimination of tenure, the prohibition on considering seniority in layoffs, or the injunction against enforcement of the procedural requirements for performance-based dismissal.

Education equity litigation, like all other litigation, must establish that state policy causes a denial to an identifiable group of students the right to equal education. … Causation matters, lest state courts take over the management of local schools. The plaintiffs failed to show either step of causation in this case, and for that reason the trial court’s decision must be reversed.

For more on the various friend of the court briefs — including one filed by former GOP Govs. Pete Wilson and Arnold Schwarzenegger — go here[5] for an EdSource overview.