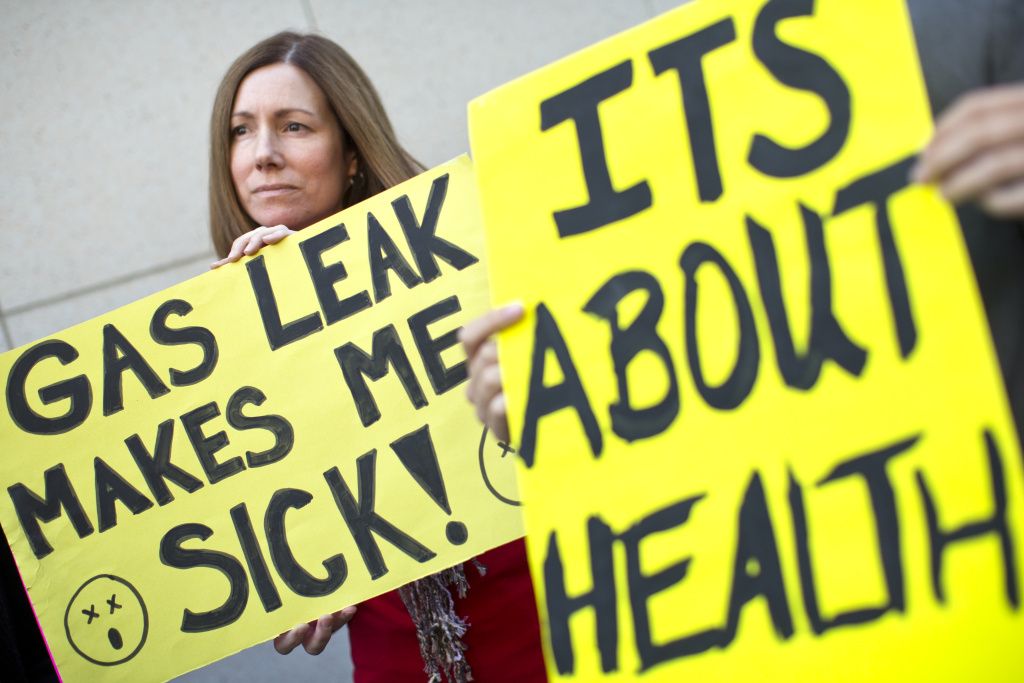 Government officials have ordered the Southern California Gas Co. to shut down its leaky Aliso Canyon well, yet the ruling is far from a victory for the thousands of sickened Porter Ranch residents, an attorney charges.

On Saturday, Jan. 23, the South Coast Air Quality Management District approved an order drafted by SoCal Gas that contains language promoting secrecy in the cleanup efforts while limiting the levels of liability in what is certain to be multi-million dollar damages.

“This order is an attempt to limit the damages from the date that they ‘follow the rules’ – which is when this was signed, Jan. 23,” said attorney Patricia Oliver, who has filed a class action lawsuit. “It’s very bizarre, almost a finding of innocence. If they are in compliance with the law.”

The ruling came down one day after a town hall meeting attended by two members of Congress and environmental activist Robert F. Kennedy, Jr., who is also an attorney on the case. More than 1,000 residents packed into a local church to get medical and legal advice on how to deal with the disaster.

The offending site is in Northridge, where 115 natural gas wells are located 8,500 feet underground. Beginning Oct. 23, area residents began getting sick and experiencing bloody noses while reporting noxious fumes permeating the area. The catastrophe continued unmitigated and caused residents to move from their homes as Gov. Jerry Brown declared a state of emergency on Jan. 6.

SoCal Gas has been unable to plug the leak and predicts that it will need another month for full compliance. Los Angeles County Health Dept. says no long-term risks exist[1].

“My daughter was hospitalized for three days in the ICU for upper respiratory problems,” she said. “My 2-1/2-year old was having trouble breathing and needed an inhaler. We were fine, living a normal happy family life until all of this happened and now we are living in a rental house with our three dogs far from home.”

Burrowed into the AQMD order[2] is language that SoCal Gas can use as a defense in against the residents in a lawsuit, Oliver said.

In other words, all SoCal Gas has to say in court is that they were following the order and the leaks were under legal levels, Oliver added.

SoCal Gas claimed that while inspecting the 115 wells it found numerous “minor leaks … below levels that would constitute a violation of current district rules” and that “all the minor well leaks … have been repaired.”

Yet the utility stopped short of including any language that would require proof of repair. Oliver has asked for such documentation and received none.

“There is no factual basis to support these statements,” she said. “All of their results have been secretive.”

While no facts have been forthcoming, SoCal Gas initially sought to specifically prevent its disclosure in the order by claiming that any data submitted regarding its progress be withheld from the public because it is a “trade secret.” This language was stricken by the AQMD.