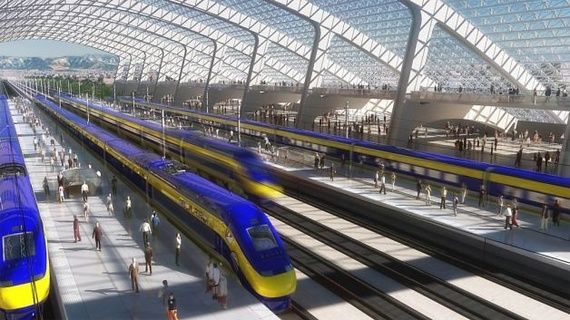 California’s beleaguered high-speed rail project has hit a new snag, likely shifting its proposed construction strategy away from the Southland-first plan it had initially adopted.

“The state rail authority is studying an alternative to build the first segment in the Bay Area, running trains from San Jose to Bakersfield,” the Los Angeles Times reported[1]. “If the plan does change, it would be a significant reversal that carries big financial, technical and political impacts, especially in Southern California.” Local officials and residents have argued that the area’s transportation needs and challenges far outweigh those in the San Francisco Bay Area, where public transportation is dense and plentiful.

The controversial, last-minute shift hinted at pessimistic calculations within the state’s High Speed Rail Authority as to how best to mitigate cost pressure and environmental constraints faced in the south, where any rail line will have to navigate — and penetrate — the area’s rugged natural terrain. “This new interest in building from the north first comes just one week after announcing an $800,000 effort to find a suitable starting location in Burbank, near L.A.,” Business Insider noted[2]. “The hope is that the north-first plan would be less risky, making it more likely that construction can begin before the project becomes politically nonviable.”

In addition to changing the project’s starting line, the new plan also shifted its destination — another concession to the dramatic obstacles posed by a scheme routed directly into the L.A. basin. “The alternative being examined would run from Silicon Valley to Bakersfield and be less costly than the current proposal to connect the Central Valley with Burbank because it wouldn’t entail expensive tunneling costs,” as the San Jose Mercury News observed[3]. “The outcome of the new evaluation will be known in the coming weeks, when the state unveils its 2016 business plan. The document will be the most comprehensive update for the $68 billion project in four years.”

At the same time, however, local officials in Bakersfield have yet to warm to the new proposal. “Connecting California high-speed rail between Kern and the Bay Area before building south toward Los Angeles would not resolve the touchier issues surrounding the project’s local impacts, but it would provide more time for planning the route south from Bakersfield,” they have informed[4] the Bakersfield Californian. “There have been contentious discussions about different proposed alignments through Kern and how they would affect local homes, businesses, schools and churches, as well as Kern’s prospects for landing a maintenance facility that would bring more than 1,500 good jobs.”

Feet to the fire

The changes have come hot on the heels of a sharp escalation in lawmakers’ displeasure toward rail authority officials. Since October of last year, when the Los Angeles Times broke news of the authority’s secrecy over anticipated cost overruns, the project’s fortunes have fallen under increasing scrutiny in Sacramento. In the story, the paper recalled[5], it “found that the years remaining before the deadline were not enough to construct 300 miles of track, bore 36 miles of mountain tunnels, build six train stations, erect high-voltage electrical systems and construct a heavy maintenance facility. The story was based on comments by tunnel engineers, construction experts and geologists.”

At a recent hearing called to address that and other issues, lawmakers were told that the Times had made a mistake about the ballooning cost of construction.