Sierra County, tucked in the foothills once traversed by the Donner Party along the Nevada border, has seen its population dip 7 percent since 2010 to 3,000 souls.

Inyo County’s population dropped a modest seven-tenths of a percent, and managed to keep its payroll package total to a minor jump, from $35.3 million in 2013 to $36.6 million in 2014.

But the price of mental health apparently increased in Inyo; Jeanette Schneider, a county psychiatrist, received an 18 percent hike in her employment package in a year, from $164,000 to $195,000.

In isolated pockets around the state, government salaries, with their accompanying benefits, continue to go up.

Even in areas in which there seems little need due to declining population, politicians like Sierra County’s Evans, who worked first as a reserve officer and moved up the ranks, are rewarded with pay increases that rival those in the private sector.

The state still stings from the public salary debacle in Bell, where in 2010 it was revealed that city officials were taking outsized salaries. The discovery led to a 12-year prison sentence for former City Manager Robert Rizzo[1]. 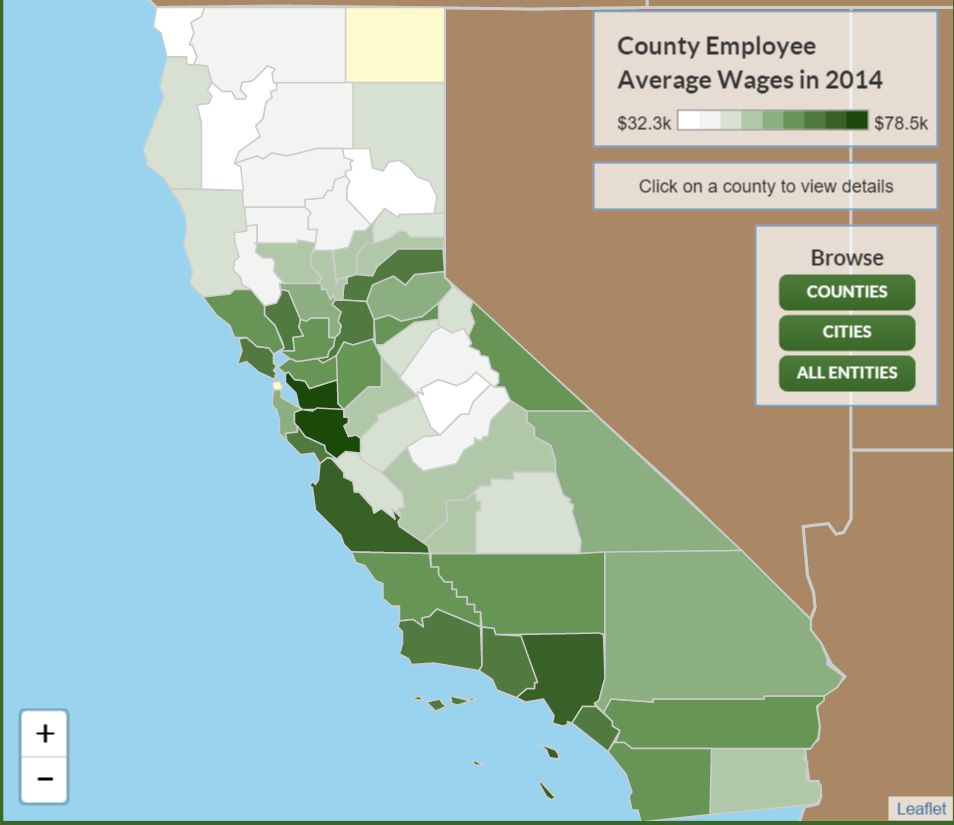 At publicpay.ca.gov, the public can see who is getting paid what at all levels of government

Today, anyone can check salaries in a number of cities, counties and schools via State Controller Betty Yee’s payroll database. Go to publicpay.ca.gov[2] or transparentcalifornia.com[3], an endeavor hatched by the Nevada Policy Research Institute[4]. The latter is used for this report.

Numerous smaller counties have refused to produce the requested information. Most of the refusals have come from smaller counties losing population, including Trinity, Alpine and Modoc counties.

In cities with modest growth, though, double-digit raises have been handed out freely.

Then there’s Kern County, which grew 5 percent while County Administrative Officer John Nilon received an $83,210 raise between 2011 and 2014.

The county pay increases have wide variances, and in some cases, both population and overall payroll has remained the same.

The population of Nevada County, for example, has remained the same for five years at around 98,000. Its payroll, at $68 million, has also stayed the same.

“We have wide differences in the state’s 58 counties, and the number of people and the pay scale will vary just as widely,” said Greg Fishman, a spokesman for the California State Association of Counties. He ventured that some of the larger increases in pay are being made up after some years of zero raises, or “catching up.”

The pay of county administrators like Nilon has always been high, and some might say outsized when considering the number of people in a county.

In a number of counties, the boards of supervisors have set higher pay rates for both administrators and elected positions such as sheriff or tax assessor.

In El Dorado County, the Board of Supervisors in 2013 vowed to cut the pay of some top positions[6] in the government, including the auditor-controller and the treasurer-tax collector.

The culprit was pay package add-ons, the board said.

“They just started getting more and more and more,” Board of Supervisors Chairman Ron Briggs told a reporter. The changes were to go into effect last year. Current total payroll is not yet available, but the episode typifies how compensation can get out of control, especially when collective bargaining contracts are in play.

Epitomizing the “more and more” concept are three physicians in Kern County, all of whom earn over $1 million in total compensation.

But despite calls for reform of the financially-troubled Kern Medical Center, where the three are employed, there has been little reform of the generous publicly-funded pay practices.

In December 2013, county leaders said the salaries at the medical center needed attention.

“We need to have a payroll review over there,” Kern County Supervisor Mick Gleason told a local newspaper[7]. “Cost control has to be paramount in everything we do over there.”

His colleague, Supervisor Leticia Perez, added that “we are making dramatic and significant changes at KMC — to better the organization. It’s good to revisit these contracts.”

In 2014, one of the three physicians, Andrea Snow, saw no boost to her regular salary of $498,429 or the cost of her benefits. Instead, her “other pay,” which can include allowances and bonuses, was boosted by $300,000, a 29 percent compensation increase.