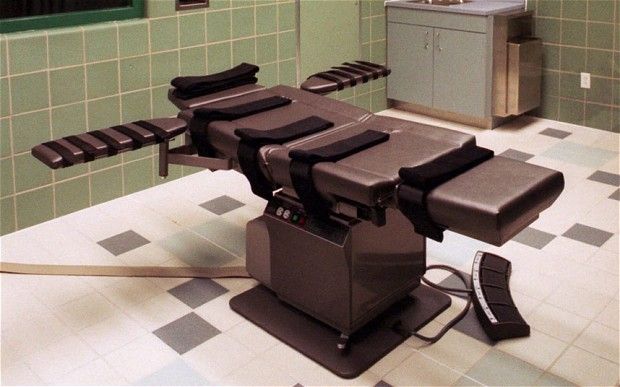 Obliged by a court settlement to figure out a new method of capital punishment, California officials have exacerbated the state’s protracted debate over executions by settling on a different kind of lethal injection.

With a widespread shortage of execution drugs used in the now-familiar “cocktails,” officials have now aimed to “let corrections officials choose from four types of powerful barbiturates to execute prisoners,” according[1] to KCRA Sacramento. “A choice would be made for each execution, depending on which drug is available. The single drug would replace the series of three drugs that were last used in 2006, when 76-year-old Clarence Ray Allen was executed for ordering a triple murder.”

“The plan to use barbiturates to execute inmates sentenced to die in the most populous U.S. state drew fire from religious activists, who called capital punishment grisly and anti-democratic at a hearing in Sacramento,” Reuters reported[2]. “Law-and-order advocates urged its adoption.”

“If the new protocol is adopted by corrections officials and voters do not outlaw the death penalty next November, the state could theoretically begin executing 18 prisoners who have exhausted their appeals. Legal challenges to the lethal injection drug, however, could drag on for years.”

Opponents of the new plan insisted that it amounted to a trial-and-error approach. “The American Civil Liberties Union of Northern California is suing to obtain at least 79,000 corrections department documents related to lethal injections,” KCRA noted. “It says the regulations may lack enough safeguards to prevent the state from using backdoor ways to obtain execution drugs that manufacturers never intended for that purpose.” Past cocktails have been harshly criticized for sometimes failing to execute inmates as quickly and painlessly as lethal injection was intended to do.

Much of the frustration around the issue stems from the unique backlog that has built up on the state’s Death Row. “It’s been 10 years since California executed its last death row inmate. Since then, the death row population has grown to 745,” KQED noted[3]. “Since 1978, 117 death row inmates have died, the vast majority from natural causes and suicide.”

Although California’s Death Row has ballooned to an extraordinary size over the years, other states have found themselves burdened by court requirements in similar ways. Florida, second to California in the size of its death row population, recently faced a Supreme Court ruling that has thrown the status of its condemned inmates into question. “Death penalty prosecutions are stalled, and state lawmakers are hustling to write and pass a new death penalty law before their session ends in six weeks,” the New York Times reported[4]. “Also in question is whether the 390 inmates awaiting execution in Florida will remain on death row or be resentenced to life in prison.” The predicament, which has gained the attention of reformers and activists across  the political spectrum, has contributed to the rise of execution reform as a hot-button issue around the country.

California’s own controversy has strengthened amid a sharp divide in statewide public opinion over capital punishment. Voters, a new poll found, have “now equally divided between scrapping the death penalty altogether and speeding up the path to executing inmates on the nation’s largest death row,” according[5] to the San Jose Mercury News. “The poll found that 47 percent of voters favor replacing the death penalty with life in prison without the possibility of parole in California, up from 40 percent in 2014. But at the same time, the poll shows that 48 percent of registered voters would support proposals to accelerate the state’s notoriously slow system of resolving death penalty appeals to pick up the pace of executions.” Both those proposals were likely to wind up on this election year’s ballot in the form of initiatives.

Opinions have split even among Death Row inmates themselves. “Opinions vary, just like I’m sure they vary on the outside,” one inmate, Charles Crawford II, told KQED. “Some of us are against it, some of us not so much. Some of us, it’s like if they’re going to do it, do it and not have us sittin’ here for 20 or 30 years.”