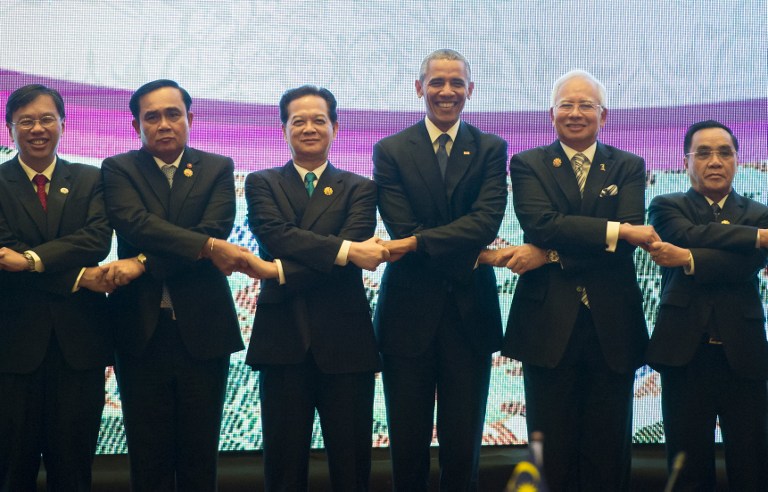 President Obama faced a soberminded summit with America’s Asian allies at the tail end of his latest trip to California, which will see him raise money for Democrats, make a guest appearance on the Ellen DeGeneres show, and catch his breath in the Coachella Valley before buckling down with ASEAN members at the Sunnylands estate.

“Next week’s special Summit is an exciting occasion for me and other members of President Obama’s Asia policy team because it brings full circle the commitment he made at the start of his presidency to refocus and rebalance our foreign policy to deepen our engagement with the Asia-Pacific region,” wrote[1] Daniel R. Russel at the Department of State’s official blog:

“The President made clear at the beginning that the region’s youthful populations, fast-paced economies, and growing consumer base were important to America’s own economic future. While these qualities are abundant in Southeast Asia, the region’s leaders have long recognized that an additional ingredient was needed for their success – a regional order based on rules.”

The Obama administration had labored last year to codify such rules in the form of the Trans-Pacific Partnership. But that landmark agreement, signed by the parties earlier this month, has run up against stubborn bipartisan resistance in Congress and nationwide. “Dozens of labor, environmental and consumer groups are urging Congress to oppose the Trans-Pacific Partnership, the 12-nation trade deal that President Obama hopes will be a signature achievement of his administration,” the Washington Post noted[2]. “Meanwhile, business groups and major trade associations are lining up in support of the pact.”

With China posing a growing strategic challenge — but weakening economically — many of the ASEAN countries have looked to the U.S. to take a leading role even without the TPP in place. In California, analysts have followed suit, banking on the possibility of more trade cash flowing the Golden State’s way. “California already conducts a significant amount of trade with the ASEAN countries,” as the Desert Sun reported[3]. “The ASEAN trade block — which comprises 10 countries, including Vietnam, Thailand, Singapore and Malaysia — is California’s fourth largest trade partner after Mexico, Canada and China. But experts say the potential for growth in the region is enormous for California’s industries.”

Nevertheless, president Obama has weathered criticism over both the summit’s invitees and its agenda. As the military regime in Myanmar negotiated a power transition with longtime dissident Aung San Suu Kyi, its candidate, outgoing president Thein Sein, abruptly canceled his plan to attend the summit, according[4] to Channel NewsAsia. Obama has also taken heat from “activists, opposition party leaders and scholars” objecting to his “decision to include Thai Prime Minister Prayuth Chan-ocha, head of the junta that seized power two years ago,” the Washington Times observed[5]. Concern has arisen “that the former army general will display the invitation as Washington’s endorsement of the military regime.”

In an apparent effort to strike a balance in reassuring domestic and international audiences, the administration released a statement focused on national security advisor Ambassador Susan Rice. “Ambassador Rice highlighted that U.S. support for civil society, good governance, and human rights is a focus area for the U.S. Rebalance to Asia and is a topic President Obama will stress at Sunnylands,” said[6] National Security Council spokesman Ned Price in a statement. “Ambassador Rice reiterated the United States’ steadfast commitment to sustaining and supporting civil society in Southeast Asia and around the world, including through the president’s Stand with Civil Society initiative.”

Adding to the administration’s burdens, meanwhile, North Korea has also cast a shadow over the event, with its recently launched satellite literally looming over California. As the AP reported[7], one tech analyst noted the device “passed almost directly overhead Silicon Valley” just after the Super Bowl came to an end. “I would put it down to nothing more than a coincidence, but an interesting one,” the analyst wrote. But the technology behind the satellite’s illegal launch “could deliver a nuclear warhead into downtown Los Angeles,” according[8] to Richard Grenell former U.S. spokesman at the U.N., who suggested that “the Obama administration is once again caught without a plan.”