SAN FRANCISCO – Kimberly Ellis has spent the last eight years trying to get more Democratic women elected to office. And now she’s the latest woman she’s trying to elevate to a top post.

She says the California Democratic Party needs to be a national leader on issues. She said its elected officials aren’t totally representative of the party’s diversity. She said many prospective voters would rather Decline To State a party preference than become Democrats. She said the party “needs a revolution.” 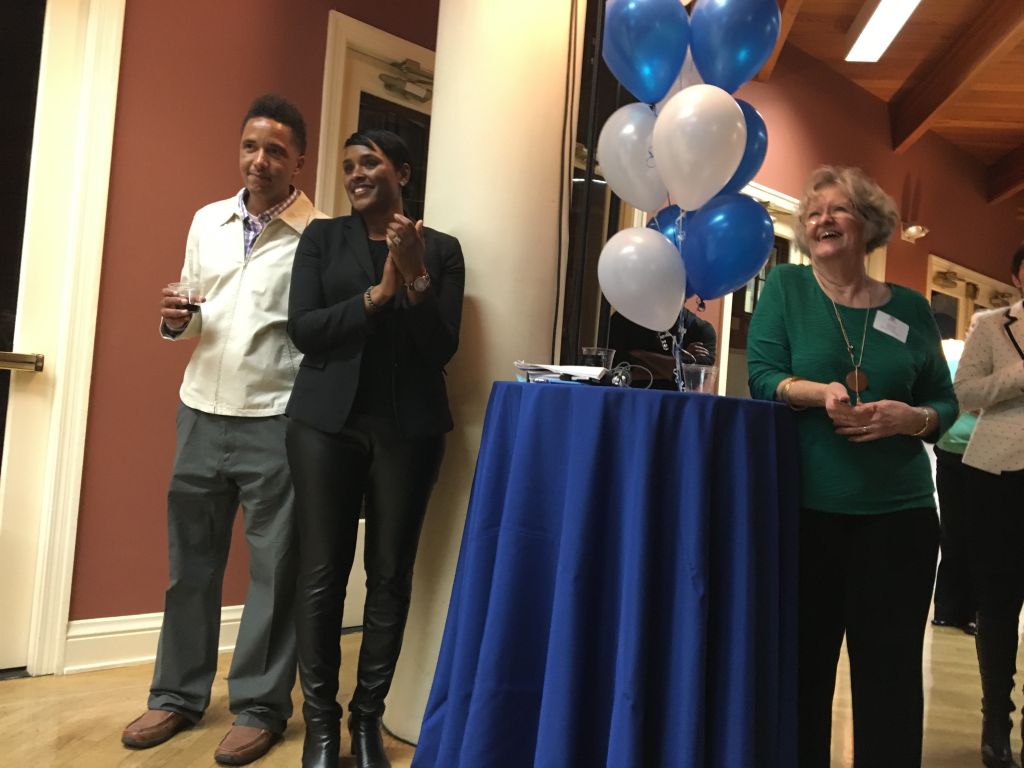 Kimberly Ellis, center, is pictured with husband James Fuller, left, and a supporter at her campaign launch event in San Francisco, Wednesday.

On Wednesday night she officially launched her campaign for state party chair in 2017 to succeed John Burton — and since Democrats have a tight grip on the state government and state politics, this race is kind of a big deal.

“This is about cultivating and grooming the next generation of political leadership that comes from California,” Ellis said to the crowd of about 200 friends, family and supporters. “And making sure … those people have the progressive values that Democrats have for fairness and equality.”

Ellis is the executive director of Emerge California, an organization that identifies, trains and encourages Democratic women to run for elected office. Many graduates of the program were in attendance Wednesday night, including Oakland’s mayor, Libby Schaaf.

The party chair helps raise money, recruit candidates, strategize in elections and serve, along with elected public officials, as a face of the party. And she’d rather focus on building the party than being a legislator herself.

Rise of Decline To State

“If we don’t take a minute to stop and step back and really look at what is going on with this Demographic shift — it isn’t just young folks between 18 and 24, it’s women and people of color who are registering as Declined To State than as Democrats — we are going to lose California,” Ellis told CalWatchdog.

Over recent years, the state has seen a rise in registered voters not stating a party preference. While Republican registration numbers have been declining for a while, Democrats have a much smaller and slower decrease. Since 2009, Democrats in the state have slipped from 44.5 percent to 43.2 of registered voters, while “decline to state” has risen about 3.6 percentage points.

Ask around about who Kimberly Ellis is and you’ll likely encounter her biggest hurdle: that outside the bay area, particularly in Southern California, she’s relatively unknown. And she’s running against Eric Bauman, who is not only well known, but has had a substantial head start in securing delegate support.

Bauman has been Los Angeles Party Chair for seven terms — where Democratic voter registration as a percentage of the electorate has slipped at a similar rate as statewide, but the total number of Democratic voters in L.A. has increased as opposed to statewide — and has been state vice chair since 2009. He’s been an advisor to many top officials, including the out-going Assembly Speaker Toni Atkins, D-San Diego.

Bauman announced his candidacy in December, and on Wednesday Politico reported that Bauman had “pledged support and endorsements from more than 550 official state Democratic Party delegates,” which is apparently more than one-third of the support necessary to win.

But the election is not for another year and Ellis is undeterred by the Politico data point, saying she plans on going to every county to speak with delegates to make her case.