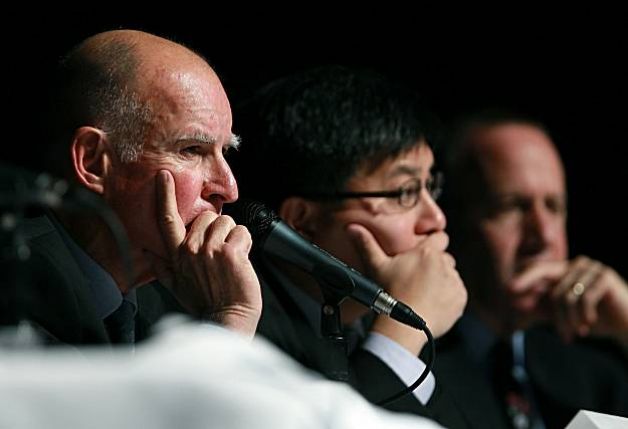 Despite a concerted effort from Gov. Jerry Brown to keep California from slipping back into the financial abyss, the state’s finances remain threatened by massive unfunded obligations.

“It’s California’s debt and liabilities that are concerning financial analysts, particularly the state’s rapidly growing unfunded retiree health care costs, which grew more than 80 percent over the past decade. California has promised $74 billion more in health and dental benefits to current and retired state workers than the state has put aside,” the San Francisco Chronicle reported[1].

Adding to the concern, new reporting rules have cast new light on local debt burdens. Changes issued by the Governmental Accounting Standards Board caused California governments to begin reporting “pension debts differently in their 2015 financial statements, which is becoming a wake-up call,” Reason noted[2]. “Medical costs and other non-pension benefits will be accounted for differently in the 2017-2018 fiscal year. As a result, localities are facing much larger pension debts than previously reported.”

Observers have also had their eye on final developments in the case of one of California’s municipal canaries in the pension coal mine. “The bankrupt city of San Bernardino, California, said in a court filing […] it had reached a tentative agreement with the creditor holding its pension obligation bonds on how the debt would be treated in the city’s plan to exit bankruptcy but did not provide details,” according[3] to Reuters.

CalPERS, the fund at the center of the ongoing pensions controversy, remained a sticking point. Its refusal to secure higher servicing payments created “a heavy political lift from Brown,” as the Contra Costa Times wrote[4] in an editorial. “If CalPERS had required higher payments, he could have simply planned for it in his state budget. Without the requirement, he must persuade the Legislature to free the money.” Amid the recession, its funded ratio, the board wrote, “plummeted to 61 percent” in two years. “If that happened today, it would be devastating.”

“CalPERS is especially vulnerable because it assumes it can earn returns of 7.5 percent annually. To try to hit that target, it must make aggressive investments. In other words, it must take risk, which comes with upside potential and downside dangers. The higher the investment target, the greater the exposure in a down market.”

One of Brown’s would-be replacements in the governor’s mansion, state treasurer John Chiang, has sought to shift expectations around California’s budgetary reliance on bond measures. Bond use has “risen substantially in California, with the state’s reliance on borrowing for infrastructure resulting in 1 of every 2 dollars spent on those projects going to pay interest,” the Chronicle noted, citing figures from the Department of Finance. But although Chiang suggested[5] earlier this month that the state should “rethink” its use of bonds, Chiang has embarked “on a national tour this month aimed at seducing investors with an environmentally friendly investment alternative,” according[6] to the San Jose Mercury News. “Chiang wants to plant a full-fledged green bond market. Individuals and institutions, such as mutual funds and hedge funds, will have the opportunity to invest. The bonds promise to appeal to environmentally minded investors, as well as those looking to diversify portfolios overly dependent on fossil fuels — in case future climate change regulations sprout up.”

But in a sign of the inertia and perverse incentives that critics often associate with entrenched bureaucracies, the bonds have been built to stretch beyond their narrowly tailored confines if given the right kind of tug. “Instead of rules, green bond issuers rely on a set of nonbinding guidelines called the Green Bond Principles, drafted by an international group of issuers and investors,” the Mercury News noted. “The lack of third-party monitoring means issuers can label almost anything a green bond. If the bonds’ popularity outstrips the number of green projects, issuers could have an incentive to label bonds as green, even when they’re not.”