The endorsement seemed inevitable for Harris, who won with 78 percent of the vote at the California Democratic convention. And it’s a major blow for Sanchez, who spent the entire weekend trying to muster support from the different caucuses. The only problem was that for all of the warm reception Sanchez received, Harris’ receptions were warmer. 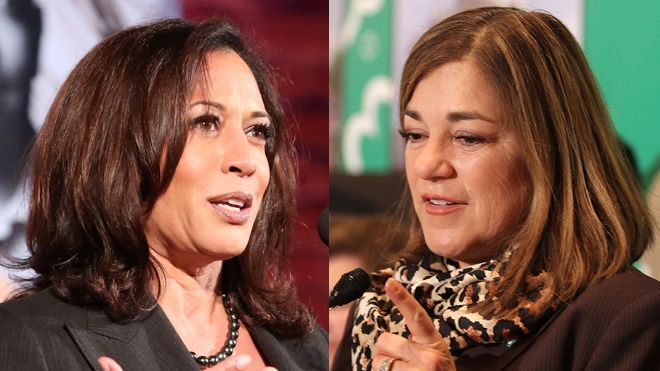 Sanchez generally is polling a step behind Harris. A Field Poll[1] in January showed Sanchez trailing Harris 27 percent to 15 percent among likely voters, behind with nearly every demographic except for among Latinos.

Sanchez has a respectable $2.1 million in her campaign account, while Harris has $4 million. There were many people at the convention in Sanchez for Senate gear, but Harris had many more.

“Congresswoman Sanchez thanks the delegates that supported her with their vote,” said Sanchez spokesman said Luis Vizcaino. “But make no mistake, today’s vote was not the primary. Congresswoman Sanchez is on track to be one of two candidates in the general election where the electoral dynamics change in her favor.”

Neither candidates’ campaign has been flawless. Harris’s has endured bad press[2] over excessive spending and staff turnover while Sanchez’s has been marred by a series of missteps, first with Native Americans[3], then with Muslims[4].

While there’s not a lot of room between the two candidates on issues, Sanchez is trying to draw on her lengthy experience as a legislator, having been elected to Congress in 1996. Several times over the weekend she pointed to making Congressional Quarterly’s[5] recent list identifying Sanchez as one of the 25 most influential women in Washington, for being a “debate shaper and swing votes.”

Sanchez points to her voting record and it’s consistency, receiving consistently high marks on Democratic issues. She also highlighted her decisiveness, arguing that voters know exactly what’ll they’ll get with her, as opposed to the unproven Harris.

For example, Sanchez came out quickly on the side of Apple in the tech company’s battle with the federal government over privacy issues, and it’s refusal to help the FBI unlock the iPhone of one of the San Bernardino shooters.

“I fully support Apple’s decision to fight the court order through the judicial process and I believe Congress must address the broader policy issues raised by this case,” Sanchez said in a statement. Meanwhile, Harris has yet to take a position.

One of Sanchez’s proudest legislative victories was changing how[6] sexual assaults in the military are reported and tracked, thereby increasing accountability. Knowing she had little chance of getting the bill passed as a standalone, she was able to add the measure as an amendment to a must-pass defense authorization bill.

Sanchez, one of the few remaining members of the once-powerful moderate Blue Dog Democrats[7], has accrued seniority on the House Armed Services and Homeland Security Committees over two decades.

And she’s made relationships in a place where relationships are the only thing that matters, noting that she’d be able to make an immediate impact in the Senate, with a firm grasp on policy and how to legislate — and it helps that many senators she served with in the House.

“It’s the duty of a senator to make policy through legislation,” Sanchez told thousands of Democrats on Saturday. “Legislation is a complex and contentious process. Success requires consensus building and institutional knowledge. While other candidates talk about boldly changing Washington, I have done it for 20 years.”

Sanchez on Friday told CalWatchdog that she’s been favored head-to-head polls against Harris. Sanchez’s plan has been to advance through the primary and hope to draw enough support largely from Latinos, moderates and even some Republicans.

“With the top two primary, her first goal has to be to finish second in the primary. so far, that looks doable with no major Republican running,” said Sonenshein. “Then anything can happen.”