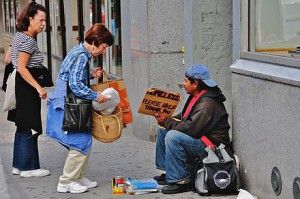 In California, helping the homeless is a popular issue in some cities and some political circles. In San Diego, elected officials of both parties say they don’t just want to reduce downtown homelessness, they want to end it[1]. In Santa Clara County, the leader of the Board of Supervisors last week declared [2]that targeting homelessness was one of his top priorities in 2016. In the state Senate, President Pro tem Kevin de Leon and other Democrats in January unveiled an ambitious plan to build $2 billion[3] in housing for the mentally ill homeless around California.

But advocates of Senate Bill 676[4], a new bill that would ban police from fining or arresting people for sleeping outdoors, is facing a tough reception.

Sen. Carol Liu, a La Cañada Flintridge Democrat who is a sponsor of the bill, depicts it as being about human rights. The language of the measure says it “would afford persons experiencing homelessness the right to use public spaces without discrimination based on their housing status and describe basic human and civil rights that may be exercised without being subject to criminal or civil sanctions, including the right to use and to move freely in public spaces, the right to rest in public spaces and to protect oneself from the elements.”

It would also allow homeless people to sue authorities if these rights were abrograted and would mandate that all local communities take steps to minimize the “criminalization of homelessness.”

However, the administration of Sacramento Mayor Kevin Johnson and local business groups in the state capital call the proposal poorly conceived and warn it could have huge potential unintended consequences.

The Downtown Sacramento Partnership, a community assessment district of Sacramento merchants, approaches the issue from an entirely different direction.

Allowing people to sleep inside cities not only creates a public safety hazard, but it undermines current efforts to permanently house people because it signals that a city is comfortable with people sleeping on the sidewalk, said Dion Dwyer, who oversees homeless outreach efforts for the partnership.

“I want to provide a social safety net that can lift up that person off the sidewalk and into services and ultimately into sustainable housing,” said Dwyer.

That is from an article [5]in the Sacramento Business Journal.

Mayor Johnson has won backing from Sacramento Councilman Jay Schenirer. “We fully recognize the good intent of this measure; however, we do not feel that it will make a positive impact in the effort to reduce and address chronic homelessness,” he wrote last month in a formal letter of opposition to Liu’s measure.

Is Sacramento really ‘criminalizing the homeless’?

Meanwhile, Sacramento Bee metro columnist Marcos Breton is pushing back[6] against some of the tactics and generalizations of those who feel Sacramento is callous toward the homeless. On Jan. 9, he wrote that it was a great misconception that …

… the city is “criminalizing the homeless.” This is a claim often made by people with political agendas. Some are seeking to abolish Sacramento’s anti-camping ordinance, which is designed to prevent people from setting up camps anywhere they wish.

The ordinance is about protecting people and property within the city limits. Protesters camped at City Hall for more than a month, however, are challenging the law, saying it unfairly discriminates against the homeless.

This being Sacramento, where political slogans are hatched and exported statewide, the “criminalizing” concept is being aggressively promoted, an incomplete narrative spread around a liberal city often flummoxed by its homeless problems.

The tension between the views of Liu and those of Breton and the Sacramento establishment appears to be one more example of the intractability of the homeless debate. Those who argue in an abstract that governments should do much more to help the homeless are countered by those who have been on the front lines of trying to directly address the problem. Many of the latter group maintain that because so many homeless people are mentally ill, the problem isn’t open to simple solutions involving using more government resources.

Liu’s bill is likely to showcase this argument and launch a statewide debate over whether local laws against sleeping in public areas are reasonable attempts to promote public safety and public health or are tantamount to criminalizing the behavior of some of the poorest, most troubled people in California.

The bill has yet to be subjected to a Senate committee vote. Liu has already amended[7] the measure once to address concerns its language was unnecesarily broad.