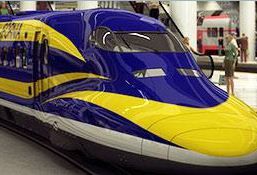 Now the rail authority proposes to instead mostly tunnel under valley communities. Two of its proposed new routes would see the bullet train go underground south of Pacoima and come out north of Santa Clarita. A third, more conventional route would still go above-ground through Lakeview Terrace, Shadow Hills and Sun Valley.

The change initially drew an ecstatic response from one local official. San Fernando Mayor Joel Fajardo called the revisions “absolutely phenomenal” in an interview [1]with the Los Angeles Daily News just after learning of the changes.

But as more information came out, others were far more skeptical. At a San Fernando Valley Council of Governments meeting on Thursday, critics offered many objections[2]. The new route would still have what were deemed unacceptable impacts on Shadow Hills and Sun Valley. A Santa Clarita official said that while the new plan was a big improvement, his city’s position remained that the bullet train should be underground the entire 40 miles-plus from Palmdale to Burbank, not just the approximately 22 to 24 miles from north of Santa Clarita to south of Pacoima. Environmentalists also said the new routes would likely harm two endangered species in the Angeles National Forest.

Rail authority officials provided no detailed information on another aspect of the proposed change: how it would affect the cost of the $64 billion project. Under previous routes, there would have been the need to have about 20 miles of the bullet train go underground. The new plan would only add a few more miles underground. But since it would require going under heavily populated areas — in addition to still having to go through mountains — that would likely add to the complexity of what the Los Angeles Times has described as “the most ambitious tunneling project in the nation’s history.”

By some accounts, underground systems cost about nine times[3] as much as above-ground rail per mile. Details matter with individual projects — cost of land, difficulty of engineering, how many changes must be made to limit effects on the public, etc. A 2013 survey[4] found underground railroad construction costs ranged from $357 million per mile in Sao Paulo, Brazil, to $960 million per mile in Singapore.

The Southern California tunnel seems likely to have a price tag on the high end. If it were to match the price in Singapore, that means at least $21 billion would have to be spent to go from north of Santa Clarita to south of Pacoima — about a third of the tab for the entire project. If the entire Palmdale-to-Burbank route were underground, that would mean at least $38 billion would be needed.

The state is still struggling to identify how it will come up with funds to build a statewide project; private investors want revenue guarantees that are illegal under state law. Lawsuits also question the project’s legality. The state Legislative Analyst’s Office also recently weighed in with a report saying it was difficult to gauge bullet-train progress because the rail authority keeps making major changes[6] in its plans.