What effect with Trump have on CA GOP? 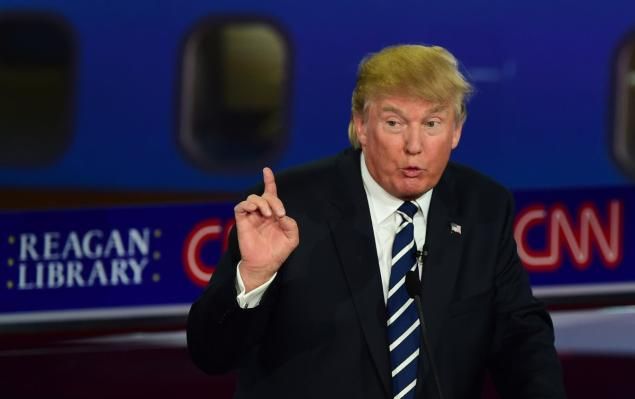 With Republican party leaders casting about for a way to stop Donald Trump, California has emerged as a possible firewall. Although a new poll of likely Republican primary voters, issued by the Public Policy Institute of California, showed[1] Trump besting Ted Cruz by 38 to 19 percent, with John Kasich at 12 percent, Cruz’s ability to wring an advantage in delegates out of states where he lost the vote outright has contributed to a sense that the Trump phenomenon might not be a disaster for established GOP officials.

Surmounting Trump will be a challenge. With Marco Rubio removed from the lineup and voters’ second choices incorporated into the poll, PPIC showed Trump still stands at 38 percent, with Cruz up to 27 percent and Kasich at 14.

“Trump continues to surpass expectations,” as the San Jose Mercury News reported[2]. “He is the leading candidate across age, income, education and gender groupings, the poll found, despite being targeted by a multimillion-dollar negative ad campaign and being called ‘a phony’ and ‘a fraud’ by the GOP’s 2012 nominee, Mitt Romney. Trump’s poll numbers have soared since the last major survey of California voters — a January Field Poll — which showed Cruz with a narrow lead.”

Because of California’s increased relevance this election, however, and Trump’s polarizing effect, the state GOP could find a silver lining in other ways. “The way the delegate math works out could hand Donald Trump the delegates he needs, or it could guarantee a contested Republican convention,” Reason noted[3].

At the same time, some analysts have predicted that the Trump effect “could bring 15 to 30 percent more Republicans to the polls — both to vote for and against him,” as the Chronicle reported[4].

“The immediate beneficiaries of a Trump bump could be the Republicans on the U.S. Senate ballot, none of whom has been given much chance to finish in the top two in the race and advance to the general election in November,” the paper added. “Typically, about 46 percent of the voters in a California primary vote Republican. But the Trump factor — and the love-him-or-hate-him voters he is expected to drive to the polls here, as he has elsewhere — could boost Republican turnout enough to vault one of the Republicans into the top two.”

Unlike some states where Trump has fared especially well, California is a so-called closed primary state, allowing only Republicans to vote for Republicans seeking their party’s nomination.

The change from California’s usual tail-end position in the primary-season doldrums has added more drama to an already disruptive race. “When George W. Bush ran in 2000 and 2004 and Sen. John McCain in 2008, California wasn’t a factor. In 2012, despite a high number of candidates early in the race, Mitt Romney was safely on his way to the nomination when California Republicans voted. Los Angeles County only drew 16.3 percent of eligible voters when Romney and President Barack Obama were the party nominees,” according[5] to the Los Angeles Daily News. “San Bernardino County didn’t fare much better, bringing in just 15.4 percent of eligible voters. But the Trump phenomenon has seen a surge in voting on the Republican side.”

That surge has come at Trump’s expense as well as in his favor, as voting patterns in California-adjacent states have suggested. In Nevada, Trump touted his ability to draw in new voters from across the demographic spectrum. At the same time, however, his decision to question “whether Arizona Sen. John McCain — a prisoner of war for more than five years in Vietnam — is an authentic war hero sparked furious rebukes from his fellow GOP presidential candidates and from veterans groups,” as the San Francisco Chronicle recalled[6] separately. But Trump later swept the Arizona primary.

Results like that have left some California Republicans worried that Trump could wind up acing out the competition in California but leaving behind an even more divided and dispirited state party.