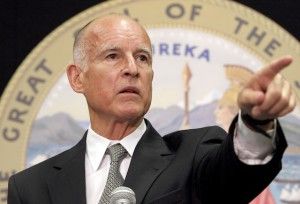 A California governor is asked to sign historic, far-reaching legislation that could have unknown consequences — and tells the Legislature he will only go along if there is an escape clause that can be used if the law causes economic mayhem.

That’s what happened in 2006 when Arnold Schwarzenegger worked with legislative leaders to shape Assembly Bill 32, the landmark law forcing a shift to cleaner, costlier sources of energy. And it’s what happened in the last month with Jerry Brown and the bill increasing the state’s minimum wage steadily until it reaches $15 an hour in 2022, which Brown signed Monday. A provision that allows future governors to suspend an increase in bad economic times was included at Brown’s insistence:

Brown had warned a $15-an-hour wage must be done carefully, noting costs to employers and the state. But with a measure heading for the November ballot, he negotiated with unions and other advocates to include provisions that allow governors to postpone an increase if the economy falters.

Those provisions would allow governors to suspend annual wage increases short of $15 if officials project that the state’s budget reserves will be in the red, or if employment and sales tax revenue decline. Governors would need to decide each September whether to suspend increases coming the following January.

That’s from the Sacramento Bee[1].

But will this escape hatch ever be used? The history of AB32 suggests not. Schwarzenegger was adamant that there must be a way that the law could be suspended, as the Los Angeles Times reported [2]in an Aug. 31, 2006, story about negotiations over the law:

For his part, Schwarzenegger won the ability for the governor to suspend the rules for as much as a year in cases of “extraordinary circumstances, catastrophic events or threat of significant economic harm.”

Not only did Schwarzenegger reject the idea that AB32 had an economic downside, he promoted the idea that it would create hundreds of thousands of jobs and touted the claim that California would inspire the world to adopt similar laws. Republican critics said he was more concerned about his legacy than Californians struggling in the recession.

If Brown invokes the clause that suspends the law steadily increasing the minimum wage in coming years, that too would muddy his legacy as the governor of the first U.S. state[5] to have a $15 minimum wage law. If the person who succeeds him as governor in January 2019 suspends the law, that also would muddy California’s image as a bold, progressive state going places no state has gone before.