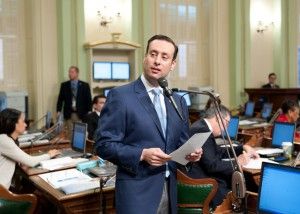 Following the news that the wife of Asm. Roger Hernández had filed a temporary restraining order against the West Covina Democrat, a lone colleague was questioning whether he should remain in a leadership position in the Assembly.

It also wasn’t Sen. Hannah-Beth Jackson, D-Santa Barbara, chair of the California Legislative Women’s Caucus. Nor was it the vice chair, Assemblywoman Cristina Garcia, D-Bell Gardens. And it wasn’t Assemblywoman Lorena Gonzalez, D-San Diego, one of the most outspoken champions of women’s issues in the Capitol.

Assemblyman Matthew Harper, R-Huntington Beach, went where those lawmakers would not, taking to Twitter Friday to question the lack of action from Assembly Democrats. Harper has been critical of Hernández before, dating back to when Harper was Hernández’s vice chairman on the Labor and Employment Committee.

On Thursday, the Los Angeles Times[7] reported that Hernández’s wife, Susan Rubio, a Baldwin Park city council member whom he is divorcing, had obtained a temporary restraining order, alleging a history of violence.

“My wife and I are nearing the completion of a 16 month divorce case,” Hernandez told the Los Angeles Times. “And despite all of the tensions that arise in any difficult situation and negotiation, at no time prior to today has there ever been a suggestion that she would need a restraining order. In fact, just minutes before this alleged incident, we were both in front of a judge with our lawyers and this issue was never raised.”

The temporary restraining order will remain in effect until a hearing in divorce court May 4.

Hernández is challenging Democratic Congresswoman Grace Napolitano for her seat, as he is termed out. On Friday, he cancelled his campaign kickoff that was scheduled for Saturday.

Jackson, the chair of the California Legislative Women’s Caucus, condemned domestic violence in a statement to CalWatchdog but declined to comment on Hernández.

“The Women’s Caucus takes domestic violence very seriously,” Jackson said. “While I cannot comment on Assemblymember Hernández’s specific situation, we believe our society should not tolerate domestic violence in any form.”

Rendon, Garcia, and Gonzalez did not respond to requests for comment.

In 2012, another woman sought an emergency protective order against Hernández, according to the news[12] reports[13]. At that time, a Baldwin Park councilwoman was demanding[14] his resignation from the legislature.

“Assemblyman Harper asked (then-Speaker Toni Atkins, D-San Diego) for Hernández to be removed last year after the ‘microphone incident,’ instead Harper was removed, not only as vice-chair, but removed from Labor Committee all together,” Harper spokesperson Madeleine Cooper told CalWatchdog on Friday. “With the recent court findings, there is even stronger evidence of the man that Hernández is and yes, he should be removed as chair now more than ever.”