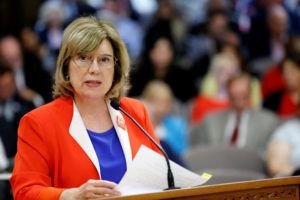 Senate Republicans packaged their best policy proposals on Tuesday, a series of bills aimed at helping veterans, seniors, homeowners and renters as well as parents and students.

Fuller cited damning stats: CNBC ranked California the 5th most expensive state[1] to live in the country in 2015, average monthly rent is 50 percent higher here than in the rest of the country[2], 40 percent of Californians[3] are living at or near the poverty line and Californians have one of the highest tax burdens[4] in the country.

And earlier this month, the American Legislative Exchange Council gave California one of the worst economic outlooks[5] in the country.

“Senate Republicans united around a very positive agenda that gives voice to Californians being left behind by their own Capitol,” the Bakersfield Republican said.

“There is no question that California has become a very expensive place to live,” Fuller added.

Fuller did not explain how the proposals would be paid for (nor did her office provide an estimate of how much the package would cost). Instead, Fuller said the government should focus on the “most disabled” and the “most vulnerable populations” as a top priority, adding that state revenues have increased steadily[6] over the last few years.

“If the priorities are carefully weighed, I think we do have enough money, especially when we’ve had extra resources come in in the last couple of years,” Fuller said.

The 11 bills center on tax breaks and proposals focused on encouraging access to work, education and homeownership.

Access to work: One bill restores MediCal coverage for one free pair of eyeglasses every other year for those who fail the DMV vision test. Another bill provides $100 standard allowance for CalWORKs welfare-to-work participants, as well as an allowance for education costs.

Homeownership: There’s a renters tax credit, a bill to eliminate property tax inflation for senior and disabled veterans, and one that would do that same for senior citizens. There’s two proposals giving a property tax exemption for disabled veterans. And there’s a proposal to encourage a homeownership savings accounts that would help first-time homebuyers with a down payment.

Unveiling an agenda at a press conference, however, is far easier than carrying the bills through the Legislature for a Republican caucus with virtually no power. They face a Sisyphean task of getting the bills through a Democratically-controlled Legislature, where they are a mere seat away from irrelevancy — below the dreaded one-third threshold.

According to Bill Whalen, a research fellow at the Hoover Institution at Stanford University, Republicans in the Legislature face three legislative options. The first is to have an idea embraced by Democrats, which could carry the bill to the governor’s desk. The other two are either the bill is dead on arrival or it gets a hearing and then fizzles out.

“There’s three outcomes, two of which are negative,” said Whalen, who served as chief speechwriter and director of public affairs for former Republican Gov. Pete Wilson.

After voters amended the Constitution in 2010[7] to require only majority approval of the state budget (as opposed to two-thirds), Republicans lost a yearly opportunity to leverage legislation as their numbers in both chambers are only slightly above one-third.

“For a few weeks anyway, Republicans had a lot of relevance in the process,” Whalen said, adding that now Republicans’ leverage is now mostly reserved for Constitutional amendments.