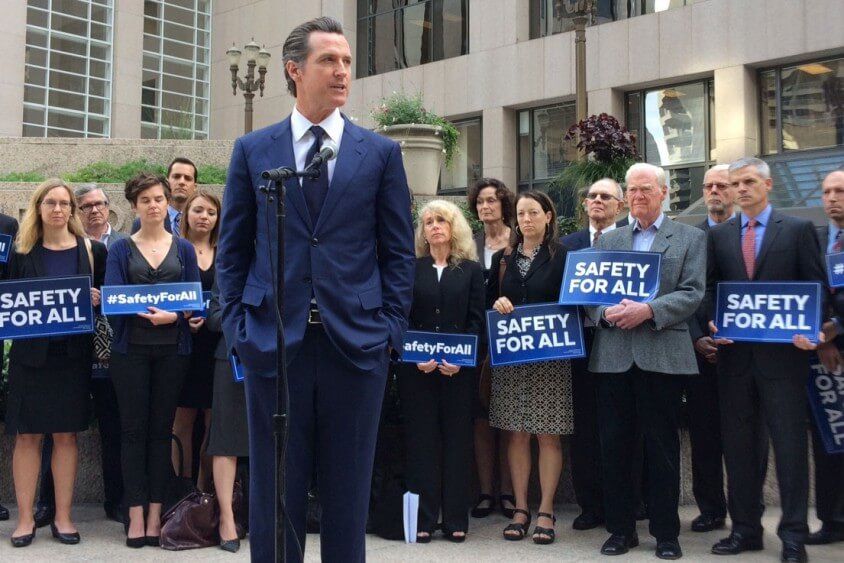 Seeking to bolster his early-bird campaign for governor, Lt. Gov. Gavin Newsom forged ahead with a controversial ballot initiative designed to put severe strictures on guns in California. But in addition to raising the ire of Republicans statewide, Newsom has begun to clash with members of his own party in Sacramento, who don’t share his vision of the right political strategy on the issue in November and beyond.

Beyond “checks for ammunition purchases — like those already in place for guns — the measure would ban possession of large-capacity rifle magazines, require gun owners to notify police when their weapons are lost or stolen, and enact rules for courts to confiscate guns from criminals who are prohibited from possessing them,” the San Francisco Chronicle reported[1]. “Other provisions would reclassify possession of a stolen gun as a felony and require California to share its background check information with the FBI.”

“Newsom said supporters will submit 600,000 signatures on petitions to qualify an initiative that would strengthen California’s gun-control laws, already some of the strictest in the nation. They need 365,880 signatures of registered voters to make the ballot.”

In 1982, the paper noted, gun control advocates’ last effort at taking their agenda directly to voters resulted in defeat at the hands of a well-organized opposition mobilized by the National Rifle Association. Republicans have already begun to plan for a similar effort. Congressional candidate Tim Donnelly called Newsom’s plan a “disaster” that would spur outsized Republican turnout at the polls, according[2] to the Sacramento Bee. “Donnelly, who was once cited for bringing a loaded gun to an airport, said in recent months he’s become an even bigger supporter of gun rights, citing the terror attack in San Bernardino,” the paper added.

With the state GOP divided and stunned by Donald Trump’s sweep toward the Republican nomination for president, however, Newsom has not put a great deal of stock in opposition to his plan from the right. On the left, however, he has stepped on the toes of legislative Democrats, complicating his plans considerably. Senate President Pro Tem Kevin de León, D-Los Angeles, “wants him to agree to step aside if the issue can gain traction in the Legislature by June,” as the Los Angeles Times reported[3]. De León “warned his fellow Democrat in a private letter on Thursday that pursuing the initiative could ‘derail’ gun control” — but “Newsom wrote back later Thursday urging de León to join his initiative drive. He voiced skepticism about legislative efforts to address gun control, adding that the measure de León supports is ‘fundamentally different’ from his ballot measure, the Safety for All Act.”

“Newsom said only an initiative, for instance, can amend part of 2014’s criminal justice measure, Proposition 47 — a portion that critics say would allow people convicted of theft of a firearm to be charged with a lesser crime than felony grand theft.”

For their part, Critical Democrats have expressed worries that Newsom is willing to risk a political miscalculation in order to establish his brand as a proactive progressive who shouldn’t be seriously challenged in his run for higher office.

Although both de León and Newsom could benefit from support from within the governor’s mansion, neither has managed to lock it in. “Evan Westrup, spokesman for Gov. Jerry Brown, maintained the governor has not taken a position on this initiative and generally doesn’t comment on pending ballot measures,” Fox News reported[4]. “But in 2013 the governor vetoed a proposed reporting of stolen or lost firearms, saying he was ‘not convinced that criminalizing the failure to report a lost or stolen firearm would improve identification of gun traffickers or help law enforcement disarm people prohibited from possessing guns.'”