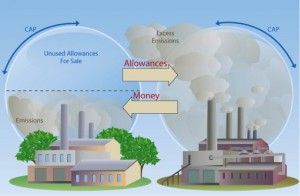 In late 2012, as officials with the California Air Resources Board were refining rules for the state’s nascent cap-and-trade pollution rights program, a huge scandal[1] was unfolding in the European Union. Five Deutsche Bank AG officials were arrested for their role in a complex scam involving using the sale of carbon-emission certificates to avoid paying taxes. Earlier that year, six cap-and-traders involved with the bank had been arrested as well.

Cap-and-trade critics had always warned that as soon as programs were introduced, there would be aggressive efforts to game and/or cheat the rules to make money. With these warnings reinforced by the EU scandal, California officials in early 2013 said they’d learned their lesson. Greenbiz.com reported[2] that …

California, with the advantage of advanced warning, has taken the EU market’s lessons to heart. It has recognized the crucial need to tightly control — and extensively oversee — who can participate in the carbon market and how. With the help of the state Attorney General’s office, California has adopted more stringent rules than the EU ETS [Emissions Trading Scheme].

Now, however, the Brown administration is pondering relaxing these rules by allowing companies to get pollution credits by paying for preservation of forest lands in Brazil.

The idea has been discussed for years[3] but has picked up momentum of late. According to recent reports, state regulators are closer than ever to formally expanding the cap-and-trade program by allowing polluting industries to offset their carbon emissions by paying indigenous communities in the Amazon to preserve the rain forests in their region.

This idea has won praise from environmental groups, who have long depicted preservation of the rain forests in the Amazon delta as a global priority. They call it a great way for Brown to burnish his environmental legacy.

The Western States Petroleum Association has also been supportive, saying industries need options to meet their commitments under AB32 and related laws.

But the initial coverage of Brown’s trial balloon omitted mention of two key issues: Gaming and cheating of cap-and-trade programs remains a huge problem around the world, and Brazil has both a long history of corruption and a lack of transparency.

In early 2015, Foreign Policy magazine reported[4] how the European Union’s program had become a “playground for gangsters, international crime syndicates, and even two-bit crooks — who stole hundreds of millions of dollars in pollution credits.”

In October, Forbes magazine reported[5] on a slew of new scandals, starting with schemers in Russia and Ukraine being accused of using the EU cap-and-trade market to sells counterfeit credits for 600 million tons worth of carbon dioxide emissions. The account noted that the less sophisticated a nation’s law-enforcement system, the more likely cap-and-trade scams were to be — and that some of the world’s richest people and companies were taking advantage.

“The cap-and-trade system of emissions trading is very difficult to control and its effects are diluted. … It is precisely because I am a market practitioner that I know the flaws in the system,” Forbes quoted financier-investor George Soros as saying.

Meanwhile, in January, Transparency[6] International reported that over the previous year, Brazil’s corruption problems were growing worse[7] at a faster rate than in any nation on the planet. Agence France Presse reported[8] last week that a scandal involving billions of dollars of missing revenue from state oil giant Petrobras continued to grow, with dozens of government and business leaders implicated.

Efforts to remove President Dilma Rousseff from office have been complicated by the fact it is hard to find many credible critics of Rousseff within the Brazilian government, given how many prominent Brazilian politicians are either directly tied to the scandal or indirectly tied through close political alliances.

According to Calmatters, state air board officials said they would look to avoid problems caused by Western nations’ cap-and-trade programs in another tropical nation: Nigeria. But the issues there involved indigenous communities being denied use of forest lands they relied on because of restrictions under new conservation agreements — not necessarily the problems that California could risk if it counts on Brazil as a partner in a cap-and-trade pact.