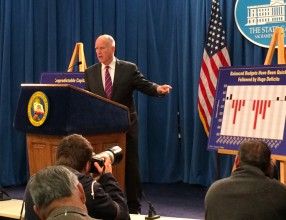 Gov. Jerry Brown on Friday repeatedly warned against new spending programs as he introduced his revised budget[1], heeding advice from Moody’s and others to bunker down and prepare for an eventual economic downturn.

While the state’s finances have substantially improved from the last economic downturn, Brown has often said the state’s over-reliance on capital gains tax revenue will force dramatic cuts when the economy goes south if the state is not prepared.

“Things don’t last forever and right now the surging tide of revenue is beginning to turn, as it always does,” Brown said on Friday. “That’s why it’s very important and best that we prepare for our time of necessity.”

Just last month, Moody’s[2] rated California as the least prepared to withstand a recession of the largest states, for the over-reliance on income tax revenue[3], a lack of flexibility due to Constitutional mandates and entitlement spending and and weak reserve funding.

In 2014, voters passed Prop. 2, a rainy-day fund. The revised budget showed contributions to the fund had been reduced $1.6 billion since January. Brown on Friday continued to call for a robust reserve fund at the expense of new programs.

“We’re going to have a very productive, substantive debate over the next month,” Brown said of the budget negotiations. “But at the end of the day, we’ve got to come out with a sizable reserve. We can’t have any significant new spending and we’ve got to get ready for the downturn.”

Voters appear likely to decide in November whether to extend Prop. 30 for 12 years[4] — a “temporary” tax on the top incomes that was originally used to bolster education funding. The revised budget notes that letting this lapse would create the better part of a $4 billion budget shortfall by 2019, requiring cuts.

“Until the voters decide this important question, no significant new ongoing spending commitments should be made,” according to the budget summary.

Brown would not take a public position on the Prop. 30 extension, saying he was “leaving it to the people of California.”