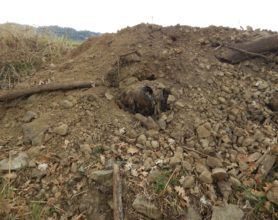 After discovering work crews had dumped a bunch of dead animals in a state waterway, a state Water Code enforcer is investigating if Caltrans ever created and implemented roadkill disposal policies, which was a requirement from the last time Caltrans got in trouble for improperly dumping dead animals.

A stockpile of dead animals, as well as other contaminates like dirt and asphalt, was found in a drainage ditch — considered a waterway — by a North Coast Regional Water Quality Control Board inspector in Mendocino County.

As barbaric as it seems at first glance, Caltrans has the unenviable task of removing roadkill from the roadways, which means the remains must be disposed of somewhere, to which there are procedures.

In 2008, state lawmakers created stricter regulations for how Caltrans would dispose of animal carcasses after it was discovered that Caltrans was dumping the dead animals in a way that allowed some of the carcasses to roll into Saratoga Creek[1] in Saratoga. Mass graves were found in Sausalito as well[2].

In addition to amending the Highway Code requiring that animal carcasses be disposed of at least 150 feet from waterways, the 2008 law required Caltrans to come up with procedures on how it would dispose of the carcasses.

Caltrans policy was to have its area superintendents establish their own procedures for handling roadkill. Caltrans has until May 27 to provide evidence of the procedures to the waterboard.

Caltrans spokesman Matt Rocco told CalWatchdog that the department was “working with our District offices to coordinate an official response to this order.”

Caltrans has so far been unable to provide evidence of the local procedures to CalWatchdog. We’ll update this story as needed.

The animals were dumped within 150 feet of the waterway, regardless of Caltrans’ policies. But the waterboard does not enforce the Highway Code, so another agency would have had to seek action on that allegation.

The waterboard is concerned with the disposal policies, particularly because of the impact decaying animals can have on the water supply.

“Decaying animal carcasses and/or parts may cause or contribute to exceedances of applicable water quality objectives in the waters of the state (e.g., pathogens, nutrients, dissolved oxygen), especially when placed in a concentrated manner,” according to the North Coast Regional Water Quality Control Board.

This is not the first time Caltrans has shown disregard for laws protecting against groundwater contamination. A few months ago, CalWatchdog reported[3] that for almost a quarter of a century, Caltrans flaunted state and local laws regulating drilling practices an estimated 10,000 times (though the number has since jumped to 20,000[4]).

The Waterboard is asking for the procedures of multiple Caltrans regions and districts. Failure to comply could result in fines of up to $5,000 per day by the regional water board and up to $25,000 per day by a court, according to the notice.

View this document on Scribd[5]
Endnotes: