San Francisco police chief out — mayor or fire chief next?

After a year of controversy over his officers sending racist and homophobic text messages and killing crime suspects in questionable circumstances, San Francisco Police Chief Greg Suhr is gone, resigning at the request of Mayor Ed Lee on Thursday. The last straw: another fatal shooting[1] in which the use of lethal force seemed hard to justify.

But Suhr’s abrupt exit isn’t likely to yield a quiet interlude in San Francisco politics. Instead, the question for residents is this: Who will be the next city big shot to be taken down? 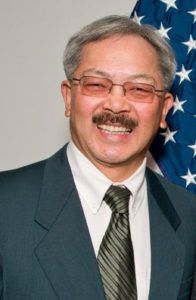 Mayor Lee is seen as a likely target of corruption investigations by both the FBI and San Francisco District Attorney George Gascon.

Chow and Lee have long had many mutual acquaintances and were seen together on many occasions at city banquets and civic functions, leading to speculation about improprieties. But it was only in late January that a specific law-enforcement threat to Lee emerged. That’s when Gascon — apparently working in concert with the FBI — arrested two former employees with the city’s Human Rights Commission on allegations that they took bribes to set up meetings with Lee. An undercover FBI agent says that Nazly Mohajer, a former agency commissioner, and Zula Jones, a former staffer, took $20,000 from him in 2011.

Lee has flatly denied any wrongdoing. But he admitted meeting the undercover agent. Meanwhile, authorities also have a tape in which Mohajer and Jones can be heard talking about ways to use the apparent bribe to pay off Lee’s 2011 campaign debts without drawing attention.

Former city Supervisor Bevan Dufty and other Lee allies have floated the theory [2]that he is the victim in the case, done in by overzealous, imprudent aides. But Gascon didn’t just accuse Mohajer and Jones of bribery and money-laundering. He also filed related charges against Jackson, the already-convicted school board president — clearly trying to depict the alleged bribery as part of the larger criminal conspiracy that the FBI’s been targeting for many years. 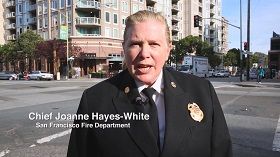 But Schur and Lee aren’t the only San Francisco leaders in hot water. Joanne Hayes-White, the longest-serving fire chief, is accused of ignoring public concerns and of borderline incompetence.

Hayes-White joined the San Francisco Fire Department in 1990 and quickly moved up the ranks, becoming chief in 2004. Her defenders depict criticism of her as politically driven, especially by a fire union with whom she has locked horns.

But a KQED report [3]last month — while noting the union’s key role in the criticism of the chief — pointed to several areas of legitimate concern. The short list:

But she had little choice after a bombshell San Francisco Chronicle investigation [7]documented that the building had passed its most recent safety inspection in August 2014 despite a number of obvious warning signs. At the building, the newspaper wrote, “fire inspectors found safety violations for years — missing fire extinguishers, blocked fire escapes, inoperable smoke alarms and locked exits … . The building also had no fire alarm or sprinkler system because state and local laws don’t require those protections for older buildings with more than 16 apartments. And though the building had a required smoke alarm that could have alerted tenants to the fire, it never sounded. Residents told The Chronicle that someone disabled it after repeated false alarms.”