Bernie Sanders goes for broke leading up to CA primary 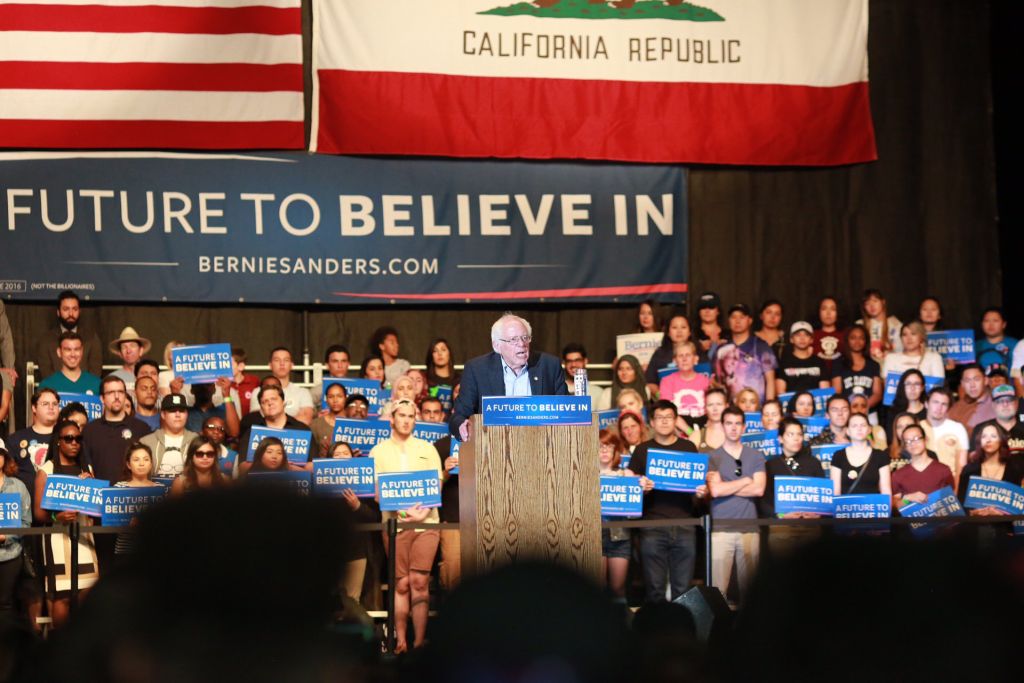 With California the final battleground in his insurgent campaign to beat Hillary Clinton for the Democrats’ nomination for president, Sen. Bernie Sanders has pulled out the stops, barnstorming the state and demanding a final televised debate, which Clinton has now declined, as his team’s lawyers filed suit in the hopes of pulling in as many new voters as they can.

The lawsuit, “alleging widespread confusion over California’s presidential primary rules,” asked a judge to push voter registration “past Monday’s deadline until the day of the state’s primary election on June 7,” according[1] to the Los Angeles Times. “At issue is whether voters understand the rules for the presidential primary, which differ from those governing other elections in California.”

Campaign lawyers also requested that the judge “require state elections officials to conduct a broad public awareness campaign about the voting rules before May 31, the deadline for requesting a ballot by mail,” the paper added.

Angling for one more shot at contrasting himself to Clinton before a wide audience, Sanders signed off on a televised event that Clinton, so far, has shied away from. “Sanders campaign manager Jeff Weaver said the Vermont senator has accepted an invitation from Fox News to debate ‘with the understanding that we can reach mutual agreement on the debate moderators, the format and other details,'” as The Hill reported[2]. “Weaver said both campaigns in January agreed to hold a debate in May in California, adding that the Clinton campaign has ‘balked at keeping that pledge.'”

Beyond the high stakes raised by the increasingly acrimonious partisan split between Clinton and Sanders supporters, the state primary’s significance has been increased by the potential role to be played in shaping the campaign’s final stages by California’s significant chunk of voters expressing no party preference. Recent research has shown “a spike with registrations for independents, another group than leans to the senator” along with younger voters, ABC News reported[3]. “However, a wrinkle in the state’s vote-by-mail rules could undercut that support with independents.”

“More than half of California voters are expected to vote by mail. But independent voters must ask local election officials to send them a presidential ballot with their state ballot. So far, 2.1 million independents have been sent vote-by-mail ballots. But most were sent to voters without a presidential ballot, according to Paul Mitchell with Political Data.”

That news had Sanders allies questioning whether the Democrats’ so-called “open primary” system was really in effect in California — giving Clinton an edge despite her relative lack of a presence in the Golden State this season. “Mrs. Clinton, a known and popular quantity who won California in 2008, has spent far less time in the state than Mr. Sanders. The Vermont senator and underdog has flooded California with rallies, commercials and organizers, hoping an upset win can help him convince superdelegates that he is the candidate best poised to defeat the presumptive Republican nominee Donald J. Trump in the fall,” the New York Times noted[4]. “While Mr. Sanders’s path appears mathematically impossible, his continued fight has meant the Clinton campaign has had to invest limited resources in the remaining primary states, rather than fully pivoting to the general election battleground states.”

With the Democrats positioned to grant Sanders and his supporters a significant degree of influence at their nominating convention, regardless of the primary season’s outcome, Sanders himself has shown a willingness to temper his attacks in California, which ramped up as his campaign’s longevity began to upset establishment expectations. “At a rally in Vista in northern San Diego County, Sanders put the brakes on his customary criticism of Democratic front-runner Hillary Clinton,” as the Los Angeles Times observed[5]. “He omitted his usual criticism of her for not backing a $15-per-hour national minimum wage, and for failing to join him in support of a carbon tax to fight climate change. In only one paragraph [of his remarks], he dispensed with his criticism of her for allowing super PACs to raise money for her benefit and for taking donations from Wall Street employees.”