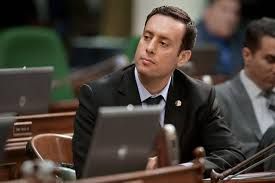 Pressure for Assemblyman Roger Hernández to step down amid allegations of domestic violence increased on Thursday as three prominent Republican women joined the small, yet growing, bipartisan group of voices demanding action.

Hernández, a West Covina Democrat, is currently under a temporary restraining order from his wife, with whom he is getting divorced.

At divorce proceedings on Wednesday, Susan Rubio, a Baldwin Park City Councilwoman, alleged that Hernández assaulted her more than 20 times during a three year period, according to the Los Angeles Times[1].

“Given the serious and growing list of accusations, Assemblyman Hernández’s continued presence in the state Assembly brings dishonor to the entire California state Legislature,” Sen. Patricia Bates of Laguna Niguel said in a joint statement with Rep. Mimi Walters of Irvine and Harmeet K. Dhillon, the vice chair of the California Republican Party.

Other calls for action

Last month[2], the top Democrats in the Legislative Women’s Caucus, Sen. Hannah-Beth Jackson of Santa Barbara and Asm. Cristina Garcia of Bell Gardens, called on Hernández to step down from his committee responsibilities, including his leadership post atop the Labor and Employment Committee, and to take a leave of absence until the legal matter with his wife is worked out.

Hernández has not been charged with a crime and he previously denied the allegations to media outlets and in court filings. His office did not respond to requests for comment.

According to the Times, Hernández’s attorney said in court that Rubio came forward with the allegations to hurt his political career. Hernández is termed-out of the Assembly and is running for Congress against incumbent Grace Napolitano, D-Norwalk.

“As a member of the California Congressional delegation, I urge Assemblyman Hernández to step down from his position and withdraw his name as a candidate for California’s 32nd Congressional District in light of the current accusations of serial abuse,” Walters said in the statement.

“Domestic violence is a very serious issue in our society, not a ‘private matter’ to be brushed under the rug by a man holding public office,” Dhillon said.

The three women’s statement called on Democrats to “echo the demand” that Hernández step down.

Speaker Anthony Rendon, D-Paramount, previously told CalWatchdog that he would take further action against Hernández “if the allegations are more fully validated.” And on Thursday, a spokesman said there was no update.

It’s not the first time Hernández has been accused of wrongdoing. In 2012, an ex-girlfriend accused him[3] of domestic violence, although charges were never filed due to insufficient evidence.

That same year, Hernández was arrested for drunk driving in a state vehicle[4], but was acquitted by a jury on one charge, while the jury was hung on another.

In 2015, allegations of political money laundering[5] against Hernández were dropped by the Fair Political Practices Commission after two key witnesses were unable to testify — one had serious medical issues while the other had passed away.