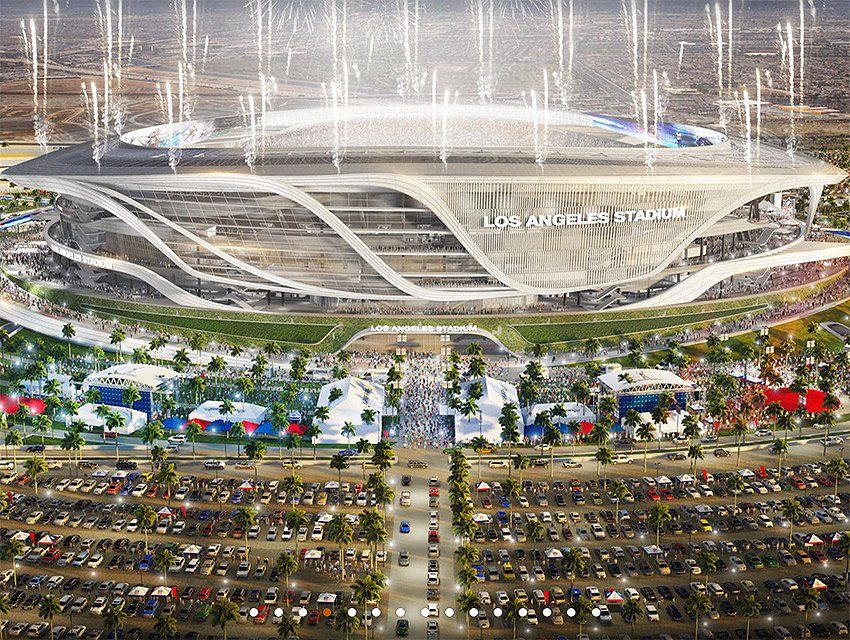 With the Rams headed back to Los Angeles, Southern Californians are poised to host another Super Bowl — but only the City of Angels made the cut, leaving fretful San Diego out in the cold.

“The game will be played at the soon-to-be built $2.6-billion Inglewood stadium, which is scheduled to open for the 2019 season,” the Los Angeles Times reported[1].

In a joint statement with Inglewood Mayor James Butts, L.A.’s Eric Garcetti praised the deal. “The Los Angeles region is built to host the Super Bowl. We helped forge this great American tradition at the Coliseum when it began in 1967; and we’re thrilled to bring it back where it belongs for Super Bowl LV.”

Until very recently, speculation had swirled that Los Angeles might lose favor to San Diego, where delicate League plans to sustain football in the city could wind up in jeopardy. “San Diego previously has hosted three Super Bowls, the last being Super Bowl XXXVII when the Buccaneers beat the Raiders to cap the 2002 season,” the Sporting News recalled[2]. But with the franchise’s future still uncertain, “the NFL does not want to lose the San Diego market. The league wants to keep the Chargers in San Diego to have two Southern California markets and two future Super Bowls in a region that has a population of some 23 million,” the site added.

But thorny city politics would have had to be swiftly surmounted. At the NFL owners’ quarterly meeting in Charlotte, ESPN reported[3], NFL owners heard “a progress report on the stadium issue in San Diego, which will include a summary on whether a citizens’ initiative ballot measure in November will require a simple majority or a two-thirds vote,” as required by California state law.

That situation was complicated further by a court decision, under appeal, that could change the League’s calculus. The nearly $2 billion stadium the city has planned to build, according to stadium advisor Fred Mass, “remains on target to collect 100,000 signatures by the first week of June, creating a buffer in order to have enough signatures certified,” noted ESPN. Nevertheless, “a recent court decision involving the city of Upland ruled a citizens’ initiative is not a measure by the local government, but by the citizens. And therefore since the tax is imposed by the citizens, that constitutional provision does not apply. The city of Upland is appealing the decision to the state Supreme Court.”

Los Angeles, meanwhile, had long anticipated that the League could reward it for luring back the Rams by handing it hosting duties. “Almost from the moment the Rams were given the green light, the wheels were in motion to secure hosting rights to the Super Bowl,” the Los Angeles Daily News observed. “Upon approving the Rams return home, the NFL immediately added Los Angeles to the host ballots for Super Bowl LIV an LV, along with Atlanta, South Florida and Tampa Bay.”

“To put in perspective what a Super Bowl means financially to the hosting city and state, a study completed by the Seidman Research Institute, W.P. Carey School of Business at Arizona State University, determined that Super Bowl XLIX and related events two years ago in the Phoenix area produced a gross economic impact of $719.4 million for the entire state. L.A. wants a piece of that pie.”

Although L.A.’s success in landing the big event owed a great deal to the excitement and money surrounding Rams owner Stan Kronke’s huge Inglewood stadium development project, a rule tweak could have ultimately pushed the bid into the end zone. “The NFL appears to have changed a longstanding rule that requires stadiums to operate for two years before hosting a Super Bowl, with L.A.’s bid specifically in mind,” as Curbed Los Angeles reported[4].