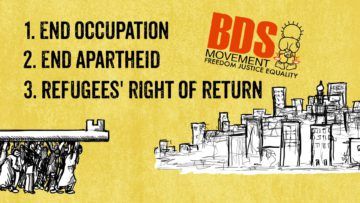 Over the past six weeks, UCLA, UC Irvine and San Diego State University have all been roiled by disputes over Israel and its treatment of Palestinians — and over how campus administrators have handled the fallout.

At San Diego State and UCLA, the responses to an aggressive gambit by conservative activist David Horowitz were noticeably different. Horowitz distributed a poster that can be filled out to identify supporters of the Boycott Divestment Sanctions movement, which targets Israel, as “pro-Palestinian terrorists.” Horowitz rejects [1]the idea that this is an extreme tactic, saying campus groups which back BDS also support Hamas, which is officially recognized by the State Department as a terrorist group.

When seven San Diego State students were so identified with the inflammatory posters in April, San Diego State University President Elliot Hirshman and his administration met with upset students. The subsequent statement issued by the university said a committee would review university policies with the goal of “balancing freedom of expression and protection from harassment.” But the statement alluded to the posters, however hateful they may be, as falling under the First Amendment — political speech with “protected status.”

This led to a protest in which dozens of students surrounded [2]a car that Hirschman was in and wouldn’t let it leave. After an hour, Hirschman got out and spoke with the students. But they remain unsatisfied and have called for the SDSU president to resign[3]. He also faces faculty criticism[4].

At UCLA, the fliers — which named faculty members as well as students — triggered a much stronger response. In an email to campus students, faculty and employees, Jerry Kang, vice chancellor for equity, diversity and inclusion, said the tactics “amounts to a focused, personalized intimidation that threatens specific members of our Bruin community,” Kang said in the email.

The Daily Bruin reported [5]that Kang said “UCLA will enforce university policies on harassment and intimidation by pursuing legal action against Horowitz.”

Horowitz responded by threatening to sue Kang for defamation. He also accused UCLA of double standards and hypocrisy — a view also voiced [6]by high-profile UCLA Professor Judea Pearl, who said even the word Israel “has been shunned by the UC administration like leprosy.”

On May 18, about 50 protesters disrupted [7]the screening of “Beneath the Helmet,” a documentary about Israel soldiers, an event that was to include a discussion between students and former Israel soldiers. After protesters blocked exits, UCI police intervened and led those in the screening room to safety amid what witnesses described as a hail of profanity and anti-Israel chants.

UC Irvine was the scene of perhaps the best-known U.S. campus protest [8]against Israel. In February 2010, 11 UC Irvine and UC Riverside students repeatedly disrupted a speech by Michael Oren, then Israel’s ambassador to the U.S.  In 2011, 10 of the students were found guilty [9]of misdemeanor counts of organized disruption of the event. They were ordered to do 56 hours of community service and serve three years of “informal probation.”

Orange County District Attorney Tony Rackauckas’ decision to pursue criminal charges over and above the mild discipline the students faced on campus was sharply criticized by Erwin Chemerinsky, dean of UC Irvine’s law school. He said it was “unnecessarily divisive.”